Are people with disabilities seen as capable parents? Are they seen at all? - The Mobility Resource

Perspectives on Parents with Disabilities and Pop Culture

The 10th annual Sprout Film Festival in New York City delivered 42 views of the life of people who live with developmental disabilities.

While the festival received a rave review on Gawker, it was hard to miss the author’s observation that the audience could fit in 150 chairs at the Metropolitan Museum of Art.

Good point, Rich. Clearly, the story of disabled people is being written, but not enough people are reading the book.

When I think of the disabled in popular culture, who comes to mind?

Well, there’s Marlee Matlin, the deaf actress who won an Oscar for “Children of a Lesser God” and has continued to show up on TV on dramas like The L Word and reality shows like Celebrity Apprentice.

There’s Chris Burke, who played Corky on Life Goes On. That was a very good example of an actor with Down Syndrome getting a prominent role on TV.

Then you have actors who portray characters with disabilities, such as Chris Clemenson, who played attorney Jerry Espinsen on Boston Legal and well as Kevin McHale, who uses a wheelchair in his role as Artie Abrams on Glee. 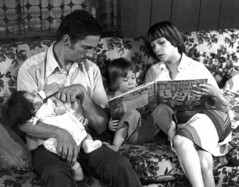 TLC has had success highlighting families who we don’t often see in our neighborhood. These families could have lots of kids (Jon and Kate Plus 8), multiple wives (Sister Wives) or height challenged (Little People, Big World).

You might find a story or two that is more uplifting than what we currently see on TV.

Thoughts On Canadian Couple Fighting to Keep Their Baby

A recent story about a disabled Canadian couple fighting to keep social workers from taking their baby brings up an important story about disabled parents.

The most important part of the phrase “disabled parents” is “parents.”

Both parents in this case have cerebral palsy and have their cognitive abilities, despite limited motor skills and slurred speech.

The social workers are focusing on the child’s need for an “able-bodied attendant,” but they don’t seem to realize that disabled parents don’t need help in focusing on what their children need and are acutely aware of their limitations.

When my wife and I had our baby nine years ago, I was still working, and Jennifer (who uses a wheelchair) took care of our daughter by herself for the first few months of her life.

When I went off to work, I didn’t worry about whether she could handle the baby. Of course, when our daughter got bigger, we needed to make the switch. I quit my job and stayed with the baby, while Jennifer went back to work.

We wouldn’t put our kid in a troublesome situation, and neither will the Canadian parents. I’m sure they would welcome a helping hand, but they shouldn’t have to worry about losing their rights to take care of their own child.