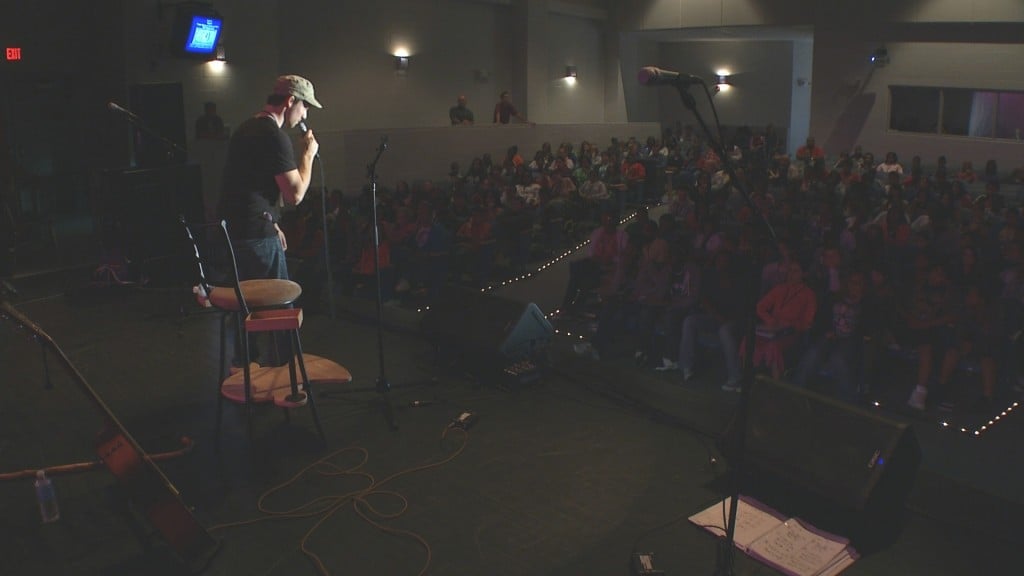 Before his song “Noise” amped up Carolina Hurricanes fans throughout PNC Arena and prior to him taking center stage at House of Blues Los Angeles musician Chris Hendricks faced a difficult challenge, overcoming bullying. Aiming to diffuse the bullying problem Hendricks and his band teams up with North Carolinian schools to present the Breaking Down Barriers program. Between November 11th and November 30th Chris Hendricks will visit seven different schools. He recently talked to The Mobility Resource about his personal experiences with bullying and the Breaking Down Barriers program.

Born with cerebral palsy, Chris Hendricks represented an easy target for bullies. The bullying, both verbal and physical, became prominent in middle school and lasted throughout high school. Hendricks recalls the experience. “If I would approach a group of students to talk to them or join them, somebody would come up to me and say ‘Don’t bother coming over here.’”

Hendricks continues, “For the most part I was either pushed up against lockers or I was completely ignored and avoided. You could just see in their (my classmates’) eyes and you could see in their faces the fear and misunderstanding.” Fear and misunderstanding too often geared towards the disability community by able-bodied individuals can fuel bullying behavior. These sentiments sometimes stem from unfamiliarity with a condition or assistive equipment, such as wheelchair vans and wheelchair lifts.

For Hendricks the bullying stopped when he entered college. He credits a change in his attitude from shy and timid to outgoing and humorous as a major reason. “I decided if I used a sense of humor to express my feelings about my disability then people hearing me, listening to me, knew I was comfortable with it and therefore they’d be comfortable with it.”

Considering self-confidence greatly helped Chris Hendricks put an end to getting bullied, confidence stands a focal point to his Breaking Down Barriers program.  He explains, “A lot of people when they approach this (bullying), they address the issue of bullying specifically. For me it has always been my philosophy that bullying really kind of starts with insecurities and kids being uncomfortable with themselves.”

He adds, “It really and truly is a confidence issue, not just for us people being bullied but the bullies themselves. They (the bullies) would have no reason to pick on anyone else if they had confidence.” By helping kids find confidence through their passions and pursuits Hendricks reasons the bullying issue will resolve. “When these insecurities fall away, the bullying will work itself out and eventually dissipate. That’s my philosophy.”

Format for the Breaking Down Barriers school programs somewhat resembles a concert. To start Chris Hendricks and his band play music for around 15 minutes. Then Hendricks spends the next 15 to 20 minutes talking about his experiences. He and his band then close out with another 15 minutes of music. Regarding the approach to the school concerts Hendricks says, “The way we approach the school shows is no different than we would approach a regular concert. The kids don’t necessarily see this as a forced assembly as much as they see it as a show.”

Looking Towards the Future

When asked about whether he wants to expand his Breaking Down Barriers program beyond North Carolina, Hendricks replies enthusiastically “Yes, that’s the goal.” His passion to further the Breaking Down Barriers program involves the gratification he personally takes away. The singer loves getting unsolicited feedback from kids who say, “I love your music because of this reason.” Or, “This is my favorite song because I can relate to this and they talk about what’s going on in their lives.”  Hendricks refers to such responses as “the biggest honor you can have as an artist.”

Regarding the near future Chris Hendricks plans on releasing his second EP Meant to Survive. The record features four tracks, each containing a unique vibe according to Hendricks. Inquired what fans can expect from the new music, the singer describes the upcoming EP as “modern sounding” and “packing more punch.” He credits producer Mark McKee for the later saying “Working with producer Mark McKee has allowed me to open up more, to be more raw.”

Opening up to The Mobility Resource Chris Hendricks shares a desire no matter what the future brings for others to recognize him first for his musical talents and not his cerebral palsy. “I mean CP will always be a part of me, but in an ideal world I want to be viewed as a musician first.” Ultimately this sentiment most likely holds true for everyone with a disability. Specialized equipment such as canes and handicap vans serve people, not define them.

*To learn more about Chris Hendricks visit www.chrishendricksband.com. If you wish to inquire about bringing Breaking Down Barriers to a school near you, please contact manager Aaron Gallagher at Aaron@acmusicgroup.com.