Comedian Josh Blue travels the country making people laugh while also educating those same individuals about disabilities. The combination seems a natural pairing considering Blue lives with a mild case of cerebral palsy (CP), something you might already know. After all, the public came to know and love Josh Blue on national television back in 2006. That year he won the fourth season of NBC’s Last Comic Standing. Recently, The Mobility Resource enjoyed the pleasure to share some laughs and chat with Blue on the role CP plays in his everyday life.

One standout attribute Josh Blue possesses is never letting CP get in the way. He put it like this. “I think it starts with my family. My parents never treated it [CP] like an issue. And I’ve always had a sense of humor and liked to laugh at things. From a young age I just didn’t take it too seriously.”

Blue explains how attitudes from those around you can influence your own thoughts. “If other people think you can’t do something, then you’re more likely not to be able to do it. But if it’s just expected of you, then why should you be any different?” Since Blue and his family don’t view CP as a problem, the comedian fails to see the disability as an excuse to not accomplishing his goals. 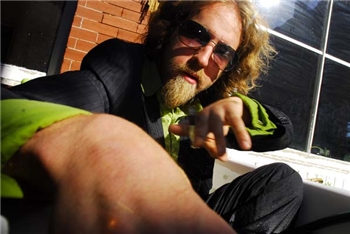 Society generally seems to perceive CP and disabilities in a daunting way. This remains evident by terminology often used in the mainstream media to describe someone with a disability, for instance “sufferer” and “victim.” Consequently this outlook can cause a negative impact. Society lowers expectations for the disability community, magically turning ordinary tasks such as simply going out to eat or to the movies into supposed inspirational milestones. Blue referred to the occurrence as “kind of degrading.”

In fairness, the lowered expectations don’t necessarily correspond with malice intentions. Josh Blue acknowledged that. “People don’t know. You know what I mean? You can’t know everything. So, if you see someone who has cerebral palsy, you know maybe you don’t understand what’s going on.”

The not knowing demonstrates the importance disability awareness serves, an awareness Blue incorporates into his stand-up routine. “Here’s the deal with my thing. Like, maybe you don’t take me seriously at first when you see me or I walk in a room. But, once I’m onstage you know that speaks for itself. If you still underestimate my abilities after you see my show, you obviously are not getting what I’m talking about.”

Beyond his hilarious jokes and ambitious attitude Josh Blue shatters disability stereotypes via his actions and activities. The fact that Josh Blue represented the United States in the 2004 Paralympics as a member of the U.S. Paralympic soccer team stands well-documented. A less common factoid, growing up Blue liked to play pick-up tackle football with the neighborhood children. “Tackle football, I use to be one of the best players on the field. I was a wide receiver and not too many people could cover me because I’m very unpredictable and probably because I had a pretty good hand.”

He fondly recalled the tackle aspect too. “I like tackling people too. It’s always a good time when the little kid with palsy tackles a big guy.” Blue discussed another activity which allows him to defy disability stereotypes. “I do a lot of wood carving and wood sculpting which you know is not something a guy with palsy usually does. Using hammers, chisels, saws, and power tools it has nothing to do with palsy but it’s not the easiest thing to do for anyone. The fact I’m a little shaky here and jiggle there, that’s the case.”

Besides wood carving and wood sculpting Josh Blue paints to satisfy his artistic drive. You can check out a couple Blue paintings below. 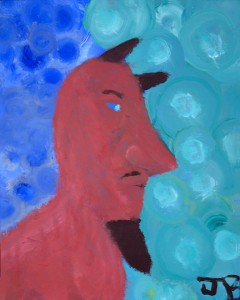 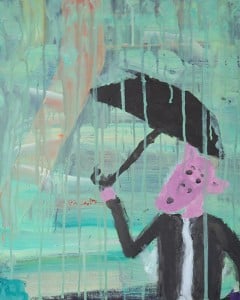 A New Outlet for Creativity

As our chat started to draw to a close Josh Blue made a point to mention his videos on Youtube. “I have tons of Youtube videos out now. Some have two million hits. That’s an art form in itself now a days, if you can put out a product that is consistently funny.” He holds much pride in his Youtube work. “That’s something I’ve been really proud of is putting cool clips out there. There are so many now.”

To see Josh Blue’s Youtube videos, visit his channel JoshBlueComedy. Look at his stand-up schedule to learn when he will be in your area.