Despite Olmstead, the Promise of Community Living For People with Disabilities Remains Unmet - The Mobility Resource 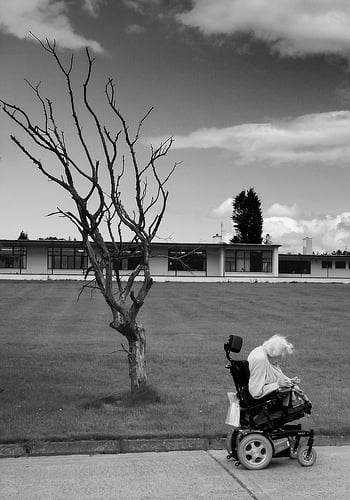 A report commissioned by Senator Tom Harkin (D-IA), Chair of the Senate Health, Education, Labor and Pensions (HELP) Committee  found that people with disabilities under age 65 are still being institutionalized in nursing facilities despite the Olmstead Supreme Court decision.

The report, titled “Separate and Unequal: States Fail to Fulfill the Community Living Promise of the Americans with Disabilities Act,” shows that though spending of Medicaid funds for institutional care has decreased from 79 percent to 50 percent between 1995 and 2010, nursing home placement for working age Americans with disabilities has risen.

The Olmstead decision affirmed the civil right of people with disabilities to live in the community under the Americans with Disabilities Act (ADA), yet 14 years after it was handed down many states have not truly committed to provide real choices for people wanting to transition from institutional settings back into the community. This is incomprehensible, as studies show not only that people prefer to live in their own homes and communities but that home and community based services costs far less than receiving services in nursing facilities and other institutions.

The number of people with disabilities in Colorado transitioning from nursing facilities and Intermediate Care Facilities for the Intellectually Disabled and Developmentally Delayed (ICF-ID/DD) into their own homes is declining, as well, from 85 in fiscal year 2011 to 64 as of August, 2012. These numbers are disturbing in light of the fact that Colorado offers a broader range of services and supports for independent living than many states. Colorado is strongly considering applying for the Community First Choice option, which will address these and other issues.

Findings from the report indicate that nationally, there are widespread inequalities in access to home and community based services, as well as uncertainty about the total cost of providing it to each eligible person, which may be preventing states from exercising new federal options in the HCBS program. Also, the report found that many states are not meeting specific benchmarks in their Olmstead implementation efforts to transition people with all types of disabilities from institutions into the most integrated setting.

Key policy recommendations from the report include Congress amending the Americans with Disabilities Act to strengthen the integration mandate in a way that accelerates Olmstead implementation and clarifies that every person eligible for long term services and supports under Medicaid has a federally protected right to real choices in where they receive services. It also recommends that Congress amend the Medicaid statute to end the institutional bias in that program to require that states pay for home and community based services, just as they currently pay for institutional care for those who are eligible. Another recommendation is that states more fully examine the enhanced federal funding from new programs designed to encourage states to transition more people into their own homes and communities, focusing on helping them live there rather than institutional settings. Almost anyone with a disability can live at home, fulfilling the promise of community living.