In the mid 80s, at approximately 8-years-old, I came home from school and seriously announced to my mother that we needed to talk. She humored me and sat down, intently listening to what was on my mind. “Mommy” I said, “I need to know what a diaphragm is.”

Although she thought 8-years-old was too young to be asking about birth control, she recalled other mothers of daughters warning her that girls mature faster than boys. So, in heed of the warning she had been given, my mother took a deep, cleansing breath and explained to me what a diaphragm was and how it prevented unplanned pregnancies. She used proper medical terminology and explained every detail as clearly and concisely as she possibly could. This was the first occasion in which my virgin ears ever heard the words “penis” and “semen.” 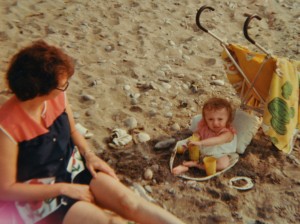 By the end of her very informative explanation, I was absolutely traumatized, disgusted and totally regretted asking what a diaphragm was. Perhaps my strong, Irish, Catholic, mother did not sense my horror and extreme confusion because she was preoccupied with her own awkward discomfort. Yet, on the surface she was calm, cool and matter-of-fact.

It seemed she was impressed with herself as she smiled, took another deep, cleansing breath and asked, “Do you have any more questions, Honey?” Although, I was exceedingly apprehensive, I did have one more question because none of this was making any sense to me. “Yes, Mommy” I said, “What does that have to do with singing?”

My calm, cool, Irish, Catholic, mother proceeded to turn several shades of red and purple as she screamed “JESUS, MARY, AND JOSEPH” and stomped her way into her bedroom, slamming the door behind her.

At 8-years-old, I had no idea how truly hilarious this tale would one day be. I could not have speculated that the “diaphragm incident” would not only set the tone for the following thirty years of our relationship but it would also be one of my fondest, most humorous memories of her.

For my mother–who was a single mother of five children, the first few years of my life were focused on learning how to deal with her youngest child having Osteogenesis Imperfecta. Doctors warned her constantly that I probably wasn’t going to live very long.

My mother was a smart woman though so she caught on quickly that I was here to stay. She then had to learn to deal with the person I was becoming. I’m not sure which aspect was more challenging–dealing with my disability or accepting my individuality. If the number of times I heard her scream “JESUS, MARY, AND JOSEPH” serves as indication, I would guess that accepting my individuality probably outranked my disability.