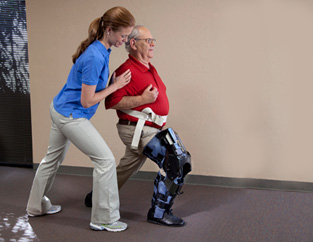 Although many probably never expected the Six Million Dollar Man to one day transcend the small screen, Dr. Robert Horst recently proved that fiction can become reality with the invention of the first wearable Bionic Leg.

Horst created the Bionic Leg while working for Tibion Bionic Technologies, a medical device company. Simply put, the Bionic Leg is a battery-powered, wearable robotic training device that activates by way of patient-initiated movement. The intent is to help patients with limited mobility in their legs due to illness or injury to become able to walk, sit or stand on their own.

According to the product description, “when a patient begins to stand up or ascend a stair, the software detects the weight shift and knee angle change and applies assistive force in leg extension to help lift the patient. When the patient wants to sit down or descend stairs, the device applies a resistance force to provide controlled descent. While walking, the device allows the leg to move freely during the swing phase and provides added support during the stance phase.” The device was also designed to protect the person while wearing it.

Horst officially debuted the Bionic Leg this past summer at the American Physical Therapy Association’s Conference and Exposition in Salt Lake City, Utah and it’s already proven to be quite a success. In fact, AlterG, Inc., the training and rehabilitation company that launched the product, stated that the Bionic Leg is currently available in over 100 hospitals, physical therapy centers and skilled nursing facilities worldwide.

“We are extremely excited about being the nation’s first skilled nursing facility to offer this state of the art technology to patients with neurological or muscular lower extremity impairments,” said Roxanne Webster, RN and director of operations at Pleasant Bay Nursing and Rehabilitation Centerin Massachusetts.

Physical therapists who have been using the Bionic Leg report that is has strengthened stance, improved gait and enhanced active motor learning. These same physical therapists also noticed it has benefited patients who’ve had strokes or suffer from chronic, degenerative neurological gait impairments, such as Parkinson’s disease or Multiple Sclerosis.

It was after he suffered a knee injury and two family members were affected by a stroke and Parkinson’s disease that Horst came up with the idea for the Bionic Leg. “It is easy to take mobility for granted until we lose it due to injury, disease, or aging. After a knee injury put me on crutches for the first time, it was a shock to see how difficult it was to get around. Much later, after other family members had been more seriously affected by stroke and Parkinson’s, I thought there ought to be a way to apply new technology to help with mobility,” Horst said.

“I looked at many different ideas for assistive devices, and it took several years to develop a concept that would provide a strong enough assist in a small, light, wearable device. We then built a team to address the many challenges in engineering, manufacturing, sales, agency approvals and clinical studies. The years of development all seemed worthwhile when we first saw stroke patients moving with help from the Bionic Leg. It was even more rewarding to see many of the patients learning to walk better on their own after a few sessions of Bionic Leg therapy.”

Horst, who now serves as Chief Technology Officer of Robotics at AlterG, said the company acquired Tibion in hopes of increasing production of the Bionic Leg and expanding availability. AlterG is already known for its Anti-Gravity Treadmill, which reduces the impact of gravity and thereby reduces pain associated with use.

“I am excited by the new opportunities that will result from the recent acquisition of Tibion by AlterG,” Horst said in a statement released by AlterG. “The additional resources in manufacturing, sales, and engineering will allow us to ramp production and make Bionic Leg therapy available to a much larger population of patients throughout the world.”

According to AlterG, the Bionic Leg is unique in the marketplace in that no other company has produced anything quite like it. Several companies are manufacturing powered exoskeletons, but they are viewed as mobility products—not products for meant for rehabilitation purposes. The Bionic Leg, however, responds to the residual intention of the patient, thereby helping to restore natural movement patterns when the patient is not wearing the device.

“We are building a world-class portfolio of the most innovative and important rehabilitation tools available to the medical and fitness markets,” said Steve Basta, CEO of AlterG. “The addition of the Bionic Leg continues our efforts to help people rehab quickly, safely and effectively.”