Life Lessons my Children Learn from having a Disabled Mom: Be Brave - The Mobility Resource

Last September I attended a multiple amputee child seminar, hosted by the War Amps of Canada, to demonstrate a robotic arm I was testing. I hadn’t been to such a seminar in years, but I quickly felt at home as I became reacquainted with old friends. The experience was a bit of an epiphany for me; making me realize how much I benefited from being around those that truly understood how I felt as an amputee. For a short couple of days, I felt the freedom of being myself in a public setting without the usual stares or barrage of questions.

On the last day, one teenager inspired us all by singing, “Brave” by Sara Bareilles. The lyrics, “say what you wanna say” and “I wanna see you be brave, “ echoed in my mind. This past year I have grown increasingly uncomfortable with others’ comments or reactions to my amputation; particularly when done around my children. The bold lyrics resonated with me, encouraging me to embrace the courage to stand up for myself.

It is not that I want to turn into a spiteful person, taking offense at every off-colour comment someone makes, but some days I wish I could unloose my tongue and deliver a zinger as equally painful. However doing so only results in a temporary satisfaction and often regret. I learned this recently when I was short with an older lady who said that I looked challenged. Yes, it wasn’t the most tactful thing to say; but I am sorry to say she took the brunt of a build-up of others’ comments and it brought the worst out of me. I wished she could have just given me a kind smile or made polite chit-chat. Rather her comment left me feeling belittled and different.

I decided that I couldn’t let people’s ignorance or thoughtlessness change my character. I don’t want to be bitter and callused, nor do I want to be passive. As a mother, I want my children to see me stand-up for myself in a respectable and mature manner.

My new mantra of being brave was recently tested when I was at a store that regularly hands out samples. When with my family, I usually have my husband or kids grab me a sample to avoid getting in anyone’s way; however, that day I was shopping solo. I went to take a sample with my feet and was informed I was not allowed to take one because of sanitary reasons and that she had been instructed by her supervisor to help me with one instead. I was appalled.

In the past I would have quietly, but resentfully complied; but this time I didn’t. I explained to the clerk that I was in fact very careful not to touch other samples, that I needed to lean against the stand to transfer the sample from my toes to my mouth, and that her passing the sample to me would actually make it more difficult for me. I told her that I likely have cleaner feet than some people’s hands, particularly little children. At which point she began to realize how ridiculous these instructions were. Most importantly, I stressed that not allowing me to take my own sample was denying me my independence. I rarely shop at this store alone because of the challenges it poses in pushing a large cart; but when I do I want to be able to be as independent as possible. As a person with a disability, I sometimes do need help, but I should be able to choose when. The clerk was very apologetic confessing she often sees people wiping their noses with their hands before taking a sample. 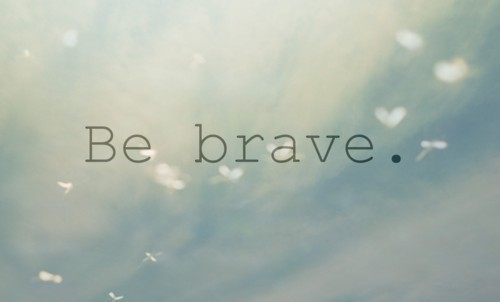 I was permitted to take a sample, but I avoided taking any others that day. I felt like I had a sign attached to me: “unsanitary, undesirable, incapable,” as I passed every single sample clerk, their eyes following me, and their lips ready to rehearse their new instructions. I was angry and humiliated that a meeting happened specifically to discuss me.

I left the store feeling singled out and discriminated against. The supervisor of the sample clerks was not there that day. I sat in the van collecting my thoughts, contemplating what I should do. The words, ‘I wanna see you be brave,’ rang in my ears. I bravely re-entered the store to speak with the assistant store manager. I reiterated my earlier rant adding how hypocritical it was that little children, who likely don’t always wash their hands well, were allowed to take samples, but that I wasn’t. I expressed how self-conscious this had made me feel and that I didn’t want this to happen to anyone else. Deep down I worried if I didn’t question the new policy, what else could be taken away from me? Would I be prohibited from touching produce or other products? My independence is priceless and worth fighting for.

My message was passed onto the store manager, who called and apologized for the incident and assured me I wouldn’t be prohibited from taking a sample. In an unfortunate twist, the sample supervisor denied involvement and I can only hope there weren’t any negative repercussions against the sample clerk.

Although my children were not with me that day, I did tell them that I had to stand up for myself. I want my children to be brave and say what they need to say especially when it is hard to do. My daughter was recently a peacemaker and I was so proud that she was brave enough to express her thoughts and desires, while considering other’s feelings. My son also tested his bravery as he faced being bullied and learned to use his voice to defend himself. In feeling this sadness, he consequently chose to pass on the unkind acts to someone else and learned another lesson on courage – apologizing for his mistakes and not letting other’s choices alter his integrity.

Perhaps I can’t always say exactly what I want to say because let’s be honest, an initial reaction to hurtful words or actions could induce an ugly response to match. However, bravery isn’t about speaking your mind in an abrasive way or hurting someone else as much as you were hurt. Nor is it submissively complying. I want my children to realize true bravery is defending yourself in a respectable way while leaving your integrity intact and your conscience free of guilt.