Today marks eleven years since the worst terrorist attack on American soil. Our country is still coming to terms with the events of 9/11, still struggling to find the optimal balance between individual liberties and necessary security measures and still discovering long-term results of the tragedy. 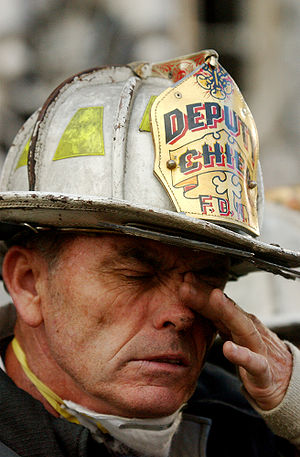 Among these long-term effects, many of 9/11’s first responders—and in particular, members of the New York City Fire Department—have been struggling with illnesses and disabilities. In addition to all those who lost their lives or their loved ones, we’d like to recognize the sacrifices of the firefighters who’ve lost their health and their livelihoods.

The years since 9/11 have seen a massive increase in NYC firefighters retiring and citing disability as a deciding factor. In August 2011, U.S. News and World Report covered a study published in the American Journal of Industrial Medicine.

What Disabilities Effect the Firefighters?

2. Pulmonary function declines at a rate of 12 times faster than normal.

Respiratory illnesses are the most prevalent for firefighters who responded on 9/11. Widespread effects were seen immediately, with 99 percent of on-site personnel experiencing at least one new respiratory symptom shortly after the attack, according to NYC.gov’s 9/11 Health. Within the first few years, firefighters were losing pulmonary function at a rate 12 times greater than normal. Those present at the time of the collapse experienced even more drastic pulmonary decline.

3. Responders are five times as likely to develop disabling COPD.

About half of U.S. adults will experience a mental-health problem at some point in their lives, according to a report from the Centers for Disease Control and Prevention. And studies suggest this number nearly doubles for those who lost friends and relatives, as well as those who helped rescue and recovery efforts. In addition, the sometimes-crippling post-traumatic stress disorder (PTSD) has also plagued FDNY firefighters.

While it’s difficult—and also still a bit early—to quantify 9/11’s tie to cancer rates among NYC firefighters, it is generally accepted that the attack has led to an increase in cases. By comparing average rates to those seen among firefighters since 9/11, the National Cancer Institute attributes just under a 10 percent increase in cancer rates to work at Ground Zero.

6. Sleep apnea is diagnosed at higher rates than normal.

Disabling poor lung function has been a persistent problem for firefighters, as well as for EMS personnel, city and state police responders, Department of Transportation workers, National Guard members and other first responders at the World Trade Center site. Obstructive sleep apnea and other chronic airway diseases have also been present at high rates.

Older firefighters have also been far more prone to the respiratory ailments above and almost three times more likely to develop asthma. While asthma can be debilitating for active individuals and pose minor health risks in most cases, baby boomers experience a mortality rate of 14 times greater than their younger peers.

8. Hundreds of NYC firefighters are still unable to work.

These illnesses and disabilities have left many NYC firefighters unable to work and enjoy the same activities they once did. Such sacrifices do not go unnoticed.

The Mobility Resource would like to offer our heartfelt condolences for those who were affected by 9/11 attacks, including those who are currently fighting the war on terror, as well as the individuals who have sacrificed their life for our freedom.

U.S. News and World Report: Disabilities From 9/11 Behind Rising Retirements for NYC Firefighters

NYC.gov’s 9/11 Health: Rescue and Recovery Workers—What We Know from the Research