BraunAbility founder and CEO Ralph Braun has passed away at the age of 72. Ralph never believed in the limits others set for himself, from the doctors who told his parents he wouldn’t live past 13-years-old to the banker who refused to give a man in a wheelchair a business loan. He founded a mobility business that would revolutionize accessibility in our country and changed the lives of thousands of individuals with physical disabilities around the world. Ralph leaves behind a legacy of innovation, determination and inspiration that will be carried on by BraunAbility accessible vans forever.

We’ll miss hearing his voice, but his words live on.

Ralph was born on December 18, 1940 to Joseph J. and Olive M. Braun in Winamac, IN. He was a pioneer in the mobility industry, struggling with spinal muscular atrophy from a young age. Out of a need to improve his own mobility, Braun built his first three-wheel scooter in 1962.

Realizing that there were many others like him, he started his own company developing and manufacturing several mobility products. This began in 1963 when he started Save-A-Step Manufacturing. This eventually grew into The Braun Corporation in 1972. What began as a solution to his own mobility needs grew to a company that would eventually change thousands of lives. In 2006, The Braun Corporation adopted the brand name, BraunAbility for its products. Today his company has grown into a world-wide corporation, with its headquarters still based in Winamac, IN. 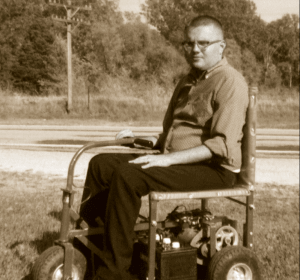 In 2010, Ralph Braun released his autobiography, Rise Above. He then started The Ralph Braun Foundation as a way to assist the disabled population with purchasing mobility equipment. As a recipient of many awards and honors, Braun’s recognition began in 1979 when he received the Employer of the Year Award from the Commission for the Handicapped and the Indiana State Board of Health.

Since that time, he has been featured on television and in many newspaper and magazine articles for his success and drive to improve the lives of others with disabilities. In 2012 he was awarded the “Champion of Change” from The White House. He was also honored with the Support of the Guard and Reserves Patriot Award. This award is for his dedicated support and flexibility offered to employees serving in the military. Ralph’s most recent award was a bronze plaque from the Adaptive Driving Alliance for being the leader and pioneer for mobility products. Braun was a life-long model airplane enthusiast and member of the Winamac Aero Modelers Club.

Ralph was a loving father, dedicated husband and wonderful friend to many. Over the years, his involvement and donations to our community were too numerous to mention. He will be greatly missed.

In lieu of flowers, the family is requesting donations be made to The Ralph Braun Foundation at P.O. Box 310, Winamac, IN 46996.

On behalf of the BraunAbility family, thank you for your thoughts and prayers.