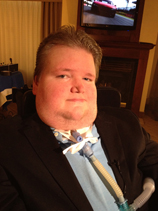 Steve Spohn is Editor-in-Chief of AbleGamers.com and Outreach Chair for the AbleGamers Foundation. He’s been interviewed as an expert in gaming with disabilities and assistive technologies by MSNBC, CNN, G4 and multiple international journals. Steve is a 32-year-old Pittsburgh native who has traveled cross-country to speak at various events including PAX East, Abilities Expos, universities and many developer studios. He is also a web designer, gamer and writer.

The shooting in Connecticut was in and of itself one of the most tragic things I have seen in my 32 years of life. As people continue to try to make sense of a random act of terror, places like Fox News begin to place blame on two things I hold very dearly: video games and disability.

In a fact-less report, Fox News reported the shooter (who shall remain nameless) may have been playing Call of Duty—a popular first-person shooter—at some point. Then when reports arose that the aforementioned shooter may have also had some form of autism, reports questioning why “nothing was done about someone in his condition,” as if having autism needs treatment in the same way someone needs a cure for poison.

This disturbs me on multiple levels.

Video games continue to be vindicated from the accusations of causing violence. While video games have been indicated as artificially triggering our flight or fight mechanisms, temporarily increasing adrenaline and aggression, no study has unequivocally linked video game violence to real life incidents.

To date, all lawsuits brought to bear over violent videogames causing tragedies have been dismissed.

In fact, other studies have proven quite the opposite. In a 2011 study, researchers found video games improve and enhance socialization. Moreover, social input has been proven as important to the mind and emotional stability of the average human as food and water are for nutrition.

In today’s international age of video games, social media, 24/7 access to television and movies, and nonstop commercial marketing, there are dozens of extremely stimulating content being thrown at us at a rapid rate. Yet, no one tries to blame Jersey Shore for an increase in steroid usage.

Media, like all things, should be used in moderation.

Even scarier are the events currently taking place in Europe. While culturally speaking, countries can be worlds apart; we simply don’t want the anti-disability stereotypes being brought back over to the United States.

One man who has dwarfism was famously mentioned by Peter Dinklage at last year’s Emmy Awards as a call to action to stop the violence against those with disabilities. The man was literally picked up by angry soccer fans as he exited a local pub. The European football fanatics slammed him to the ground mimicking the so-called sport of “Dwarf Tossing” causing massive and irreparable injuries to the innocent man who just wanted to watch the game and have a drink.

Others in the UK continue to report incidents of violence and atrocities being taken against those who have disabilities. What seemingly started this mess across the pond was a civil rights issue over able-bodied people scamming the government of disability money. People then begin to blame the disabled for the economic troubles of the entire country. And in a sense of vigilante justice, attempted to root out those who might be faking a disability by doing horrible things like throwing them out of wheelchairs.

These are the kinds of hysterical activities that can be stirred up by our nation’s media outlets.

When considering what possibly could have made someone do horrific acts of violence, such as the one in Connecticut, it’s important to realize some things just can’t be made rational.

In the case above, this was a very overaggressive and mentally unstable individual who was simply let down by the mental health care industry of America. Without proper mental health care, individuals who have these types of behaviors can go unchecked or sent directly to prison instead of receiving care.

Video games are not to blame. Being disabled is not to blame. These tragedies and the one like it are irrational and unexplainable. They happen because people who are not mentally well are left without treatment.

I hope we can come together and stop looking for someone to blame. We must realize the real way to help prevent further tragedies is to remove the stigma from mental health. Allow people to safely go and get help without fear of public ridicule and/or allow loved ones to seek help for those they know might be in trouble without the red tape of the legal system.

The ADA did a wonderful job of helping to push the rights of the disabled to the forefront of American culture. No longer is someone who uses a wheelchair barred from a local restaurant for looking different or people who have extremely visible disorders removed from local shops.

We have moved past that.

It’s important that we continue moving forward and instead of blaming various communities for horrific actions of lone individuals, we should be focusing on how to help more of those who could potentially become the next troubled individual willing to go too far.