Sports involving both athletes who need accessible transportation adaptions and athletes who do not use such, offer many benefits to a given community. Calgary Sledge Hockey Association (CSHA) President Jon Bateman recently chatted with The Mobility Resource to discuss at length adaptive sports, specifically sledge hockey. The adaptive counterpart to traditional hockey, sledge hockey neutralizes physical limitations and enables individuals with disabilities to hit the ice.

Life Prior to Adaptive Sports

Interestingly enough, growing up with spina bifida in High River, a small Canadian town roughly an hour away from Calgary, Jon Bateman did not know about adaptive sports. He explains ““Adaptive sports just weren’t available where I lived.” This proves understandable considering for nine years no other students at his school had physical disabilities.

Instead Bateman notes friends, family and the community in general worked to alter games so he could participate, recalling “They would adapt gym class a little bit to help allow me to participate. I played dodgeball. I played road hockey with my brother.” Yet he mentions, “It was always a little bit different. They would shoot the ball off of me to try and get me to score.”

While he appreciated the efforts, Bateman really emphasized the difference sentiment. “It wasn’t the same. It wasn’t full participation like adaptive sports but it was good that my community, my family and my friends made an effort to include me. I just found though when I got to playing sledge hockey later it felt so much more natural and so much more like my own game. I really appreciated that.” 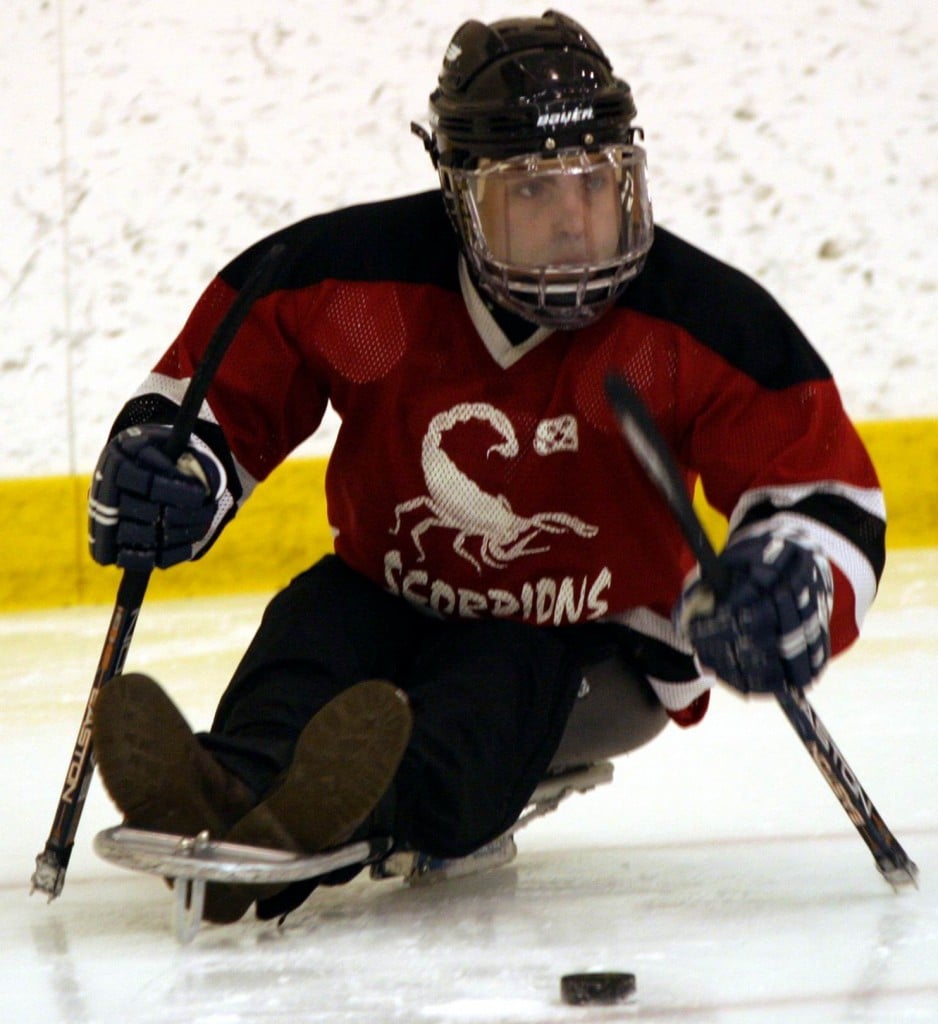 Jon Bateman first discovered sledge hockey one late college night. . “I had moved to Calgary as a 20-year old to go to college. I didn’t really know sledge hockey existed until I saw it on TV about 3:00 am one night. So I saw it on television and realized it was a game I could play.” Motivated, he did some research and by the following weekend Bateman joined the CSHA.

“I felt a sense of belonging. It’s a game where players are all on equal footing and it’s just a sport. When we all go to play sledge hockey we don’t really think about ‘We’re playing an adaptive sport’ or that we’re thinking ‘Boy this is great this is adapted for me.’ In our heads we’re just going to play hockey.”

In an ironic way the term “adaptive sport” still provides accuracy because adaptive sports maintain the power to adapt others’ perceptions about disabilities. For instance, Bateman discusses games CSHA teams play against able-bodied athletes. “One of the things we do to make people aware of sledge hockey is playing games against able-bodied players and able-bodied teams. We put them on a sled like us and we play against them. We find that a major perception change for people who don’t have disabilities, to get into a sled and realize how difficult the game is and realize how much skill it takes to play.”

He continues, stressing the positive impact perception changes possess. “I think there is a whole respect that’s earned for people with disabilities and the sport in general when they do that. That changes how you interact with people with disabilities on the playground, at school, everywhere because you can get an appreciation for ‘this is a real legitimate sport.’”

Adaptive sports can also internally improve perceptions amongst the disability community. Bateman loved hockey since a young age but until he discovered sledge hockey he deemed his participation limited. “I was really into it (hockey) but I was more into it from a fan perspective. I thought I wanted to be a broadcaster because it didn’t really occur to me that I could play.”

Getting active in adaptive sports may require overcoming barriers. Bateman states, “It’s quite easy to find possibilities, things you can do. But, it’s quite another story for a person with a disability to actually physically go and get where they need to be to try things.” Obstacles you might face involve financial issues, access to handicap accessible minivans and addressing personal fears.

Expanding on personal fears as barriers to adaptive sports Bateman says, “Sometimes scares people away from playing, especially sledge hockey. I think they think ‘Ooh, that’s so violent’ and you’ll get hurt.” Rather he encouragingly states, “I think there really is room for recreational sledge hockey. There is room for competitive sledge hockey. They are both there and they can both strive and grow.”

Now if you wish to get active in adaptive sports, the Internet remains a common sense tool to discover clubs and sports around your area. Additionally Jon Bateman recommends reaching out to local non-profits who could likely help point you in the right direction. So conduct your research, pro-actively address any conceivable mobility transportation issues or other probable barriers, and become active!