What's With All the Disability Hate? - The Mobility Resource

What’s With All the Disability Hate? 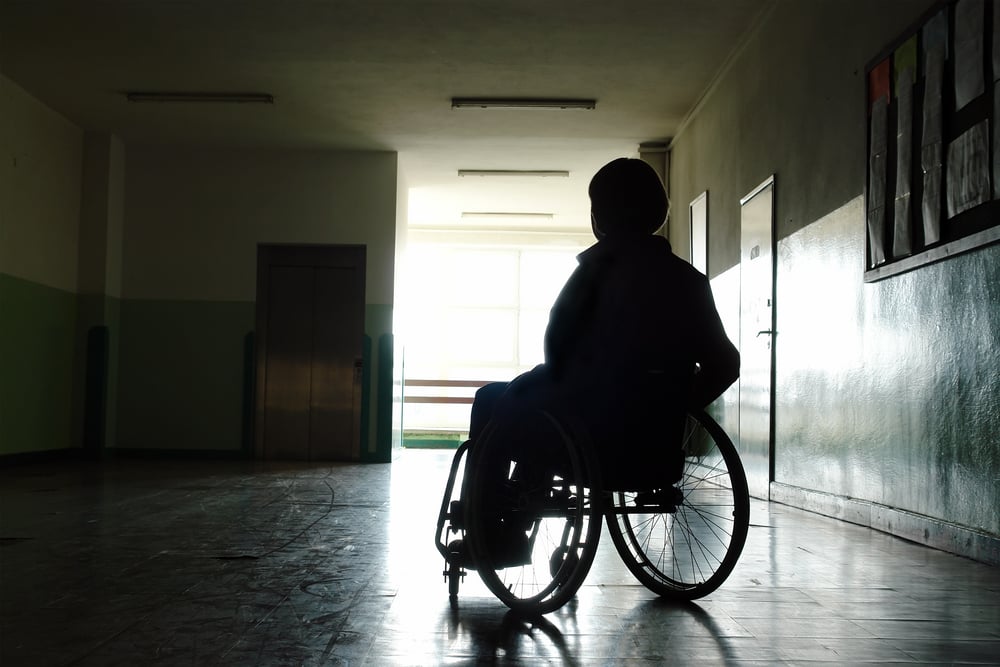 It was five degrees below zero and I was getting on the school bus as a wheelchair-user for the very first time. My neck brace was freshly off and I was in my squeaky new E&J chair, being sent back to high school.

I had missed the first three months of ninth grade because of a spinal cord injury. As a gawky 14-year-old stuck in a power wheelchair, feeling like an alien, worried my peers would reject me, yeah, I was deathly afraid of going back. And after getting on the bus that morning is when I experienced my first taste of hate because I was disabled. It was the bad kid with bad parents and he always had something to say.

It happened after everyone had to wait for what seemed like an eternity while I got strapped in. After the bus driver left, the kid turned around, looked right at me and said, “You’re a retard and you should ride the retard bus.” I broke down into tears. He just looked away and no one near us said a word (even though everyone heard had what he said). I knew right then life was going to be different.

What happened to me that morning is just a smidge of what happens in cities all over the world and on a much more serious level. Hate crimes toward the disabled especially are on the rise in the U.K. That’s right, one of the most developed countries in the world is seeing a resurgence of hate crimes against people with disabilities and experts aren’t sure why. Perhaps it’s been happening all along they speculate and people are just now becoming braver to report them. No one is quite sure.

And one of the most heartbreaking stories to happen since this so-called  resurgence is the murder-suicide of Fiona Pilkington and her daughter, Francecca Hardwick, who was developmentally disabled. For years, Fiona and her daughter were verbally abused and relentlessly taunted by youths, who’d throw stones at their home and yell from the street. Fiona reported the abuse to police 33 times over a seven year period, but they never responded in a serious matter.

In 2007, Fiona hit a tipping point and killed herself and her daughter by burning their vehicle with them inside. Sadly, authorities only now seem to care after the fact. And since that time, hate crimes towards the disabled in the U.K. have seemingly gotten worse. According to DisabilityHateCrime.org.uk, 90 percent of people with learning disabilities reported being harassed last year. And out of that, 47 percent were either assaulted, robbed or spat on. Spat on, really? Who does that?

Overall, between 2011 – 2012, 1,744 disability hate crimes were reported in England and Wales, and authorities believe thousands of other hate crimes never get reported. In a poll conducted by TUC’s Action for Rail campaign released in April 2013, they also found that one in four people with disabilities experience some kind of hate crime or abuse whenever they ride the train. That’s just unacceptable.

And another trend that’s incredibly stressing is “mate hate,” where a very evil kid, or typically several kids, pretend to be friends with someone with a disability only to abuse them in some heinous manner once they gain their trust.  The case of Steven Simpson is one you’ll never forget. He had Asperger’s Syndrome and on his 18th birthday his so-called “friends” doused him in tanning oil, set him on fire, killing him. His friends were prosecuted.

All of this really boggles my mind. How can so much cruelty fueled by ignorance exist? Psychologists may peg parents or even basic human nature, but all I know is this needs to stop once and for all. And not just in the U.K. We’re far from perfect here in the U.S. There needs to be a collective wave everywhere in the world of a flat-out refusal of allowing ourselves to be so base…so evil…when it comes to disability.

I just wish I knew how to set this wave into motion. There’s a new film however that may help. It’s called Paul’s Story, and it’s awareness film produced by the Hampshire Police Department/Constable, a city in the U.K. that had 52 hate crimes reported last year.

The film follows the life of Paul, an adult with a developmental disability who’s misunderstood by his community (a major cause of hate crimes). They end up not understanding his “quirks,” and judge him harshly to the point of abuse. Hopefully the film will get people thinking about this issue.

As for here in the US, hate crimes towards the disabled are alive and well. Just this week a news story broke on a trio of adults in Ohio who enslaved a mentally disabled mother and her baby for the last two years, forcing the mother to clean their home by intimidating her with pit bulls and pythons. This sounds like a horrible scene from Seven, but no it’s real life.

And another horror was just revealed again in the U.S. this week – a 32-year-old man with Down’s Syndrome died in Philadelphia, with his mother and two sisters charged with third degree murder for neglect. Robert Gensiak was only 69 pounds, covered in scabies and open sores at the time of his death. And the mother’s only concern – losing his Social Security check.

And in 2011, authorities discovered several mentally disabled adults were kept prisoner in a home in Philadelphia, with their caregivers stealing their food stamp money and forcing them to do manual labor. And even more disturbing, a 17-year-old girl in Canada last year was convicted of beating a disabled man and stealing from him. Disability hate crimes can and do happen everywhere.

Since that morning in 9th grade, I’ve experienced dozens of other harsh words and discriminatory looks, but I’m lucky – I have a voice and I’m not afraid to use it. I now just verbally abuse them back, and call 911 while I’m doing it.

Have you experienced hate crimes because of your disability?