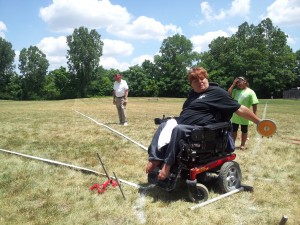 Zena Cole knows exactly how important a reliable wheelchair van is as she travels the world competing in the club throw and discus.

Being stranded by the side of the road cost her family a trip to Disneyland, but she managed to make it to Miramar, Fla., to earn a spot on the U.S. Paralympic team in 2010.

Cole told this story at the Ohio Wheelchair Games on June 22 in Columbus, after she tossed the discus 5.42 meters. This was just shy of the 5.52 national record she set one month earlier at the Desert Challenge in Mesa, Ariz.

The record-setting toss qualified Cole for the 2012 Paralympic Games in London, which will begin on Aug. 29. She also set a national record in Mesa with a club throw of 13.68 meters.

Cole, a 55-year-old Toledo resident, will be among 19 female athletes and 34 male athletes representing the U.S. at the worldwide competition.

While sports can sometimes take athletes away from their families, Cole brings her kids and grandkids with her to competitions. The older children volunteer to help the event organizers, running stopwatches and marking distances of javelin throws.

In addition to her family, Cole also brings other members of the Toledo Raptors team in her wheelchair van, as they each wait their turn to use the lift.

The Raptors won the large team award at the 2011 Ohio Wheelchair Games, after capturing the medium team award in each of the previous three years.

Cole also won the 2011 Spirit award, and shows her great sportsmanship by aiding the junior athletes who use manual chairs.

She’ll use her motorized wheelchair to give them a lift to the starting line and this in turn helps stretch her hands and muscles in her arms.  Stretching is important to Cole because of the loss of muscles from polio at the age of 18 months.

“Once, I had four (athletes) on each side of me spreading out; it was like an airplane,” she said. 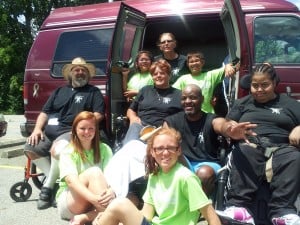 Ohio Wheelchair Games coordinator Daniel Barker said, “It’s great to have someone like Zena around, with that level of sportsmanship and who has competed internationally.”

In addition to competing in the field events, Cole also traveled with her crew to The Ohio State University for the Air Guns competition.

This won’t be the first time Cole has represented the U.S. in international competition. She competed for the U.S. last year at the Parapan Games in Guadalajara, Mexico, and at the World championships in Christchurch, New Zealand.

Cole did more than just compete; she captured the gold medal in the discus in Mexico and the silver medal in New Zealand. 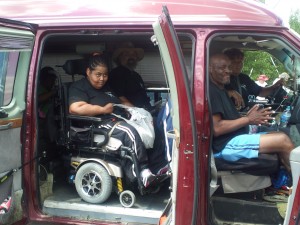 “Standing on the podium in Guadalajara with a Mexican on either side of me gave me chills and tears; it was a dream come true,” she said.

Cole will compete in the U.S. National Paralympic trials later in the summer before London comes calling.

Her journey began as a teen-ager with the Toledo Marathon Silver Streaks. After competing “for fun” for decades, she was told that her results were good enough to hit the big time.

“I can’t even picture it,” she said. “I was able to go from throwing the club 8 meters to 13 and the discus from 3 meters to 5. It’s amazing that this would be a reality.”