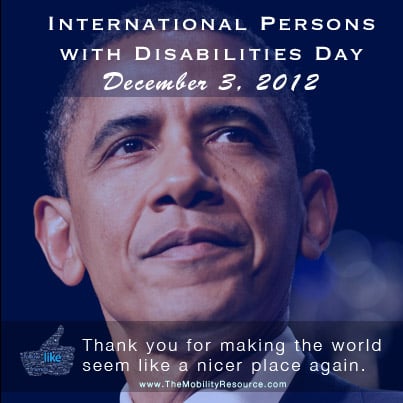 INTERNATIONAL DAY OF PERSONS WITH DISABILITIES 2012

BY THE PRESIDENT OF THE UNITED STATES OF AMERICA

Americans have always understood that each of us is entitled to a set of fundamental freedoms and protections under the law and that when everyone gets a fair shot at opportunity, all of us do better. For more than two decades, our country has upheld those basic promises for persons with disabilities through the Americans with Disabilities Act — a sweeping civil rights bill that moved our Nation forward in the journey to equality for all. And from making health care more affordable to ensuring new technologies are accessible, we have continued to build on that progress, guided by the belief that equal access and equal opportunity are common principles that unite us as one Nation.

On the 20th International Day of Persons with Disabilities, we reaffirm that the struggle to ensure the rights of every person does not end at our borders, but extends to every country and every community. It continues for the woman who is at greater risk of abuse because of a disability and for the child who is denied the chance to get an education because of the way he was born. It goes on for the 1 billion people with disabilities worldwide who all too often cannot attend school, find work, access medical car or receive fair treatment. These injustices are an affront to our shared humanity — which is why the United States has joined 153 other countries around the world in signing the Convention on the Rights of Persons with Disabilities, which calls on all nations to establish protections and liberties like those afforded under the Americans with Disabilities Act. While Americans with disabilities already enjoy these rights at home, they frequently face barriers when they travel, conduct business, study, or reside overseas. Ratifying the Convention in the Senate would reaffirm America’s position as the global leader on disability rights and better position us to encourage progress toward inclusion, equal opportunity, full participation, independent living and economic self-sufficiency for persons with disabilities worldwide.

We have come far in the long march to achieve equal opportunity for all. But even as we partner with countries across the globe in affirming universal human rights, we know our work will not be finished until the inherent dignity and worth of all persons with disabilities is guaranteed. Today, let us renew our commitment to meeting that challenge here in the United States and let us redouble our efforts to build new paths to participation, empowerment and progress around the world.

NOW, THEREFORE, I, BARACK OBAMA, President of the United States of America, by virtue of the authority vested in me by the Constitution and the laws of the United States, do hereby proclaim December 3, 2012, as International Day of Persons with Disabilities. I call on all Americans to observe this day with appropriate ceremonies, activities and programs.

IN WITNESS WHEREOF, I have hereunto set my hand this third day of December, in the year of our Lord two thousand twelve and of the Independence of the United States of America the two hundred and thirty-seventh.

About The Mobility Resource

Powered by BraunAbility, The Mobility Resource  is a network of over 80 independent adaptive driving dealers featuring the largest inventory online of handicap vans for sale.