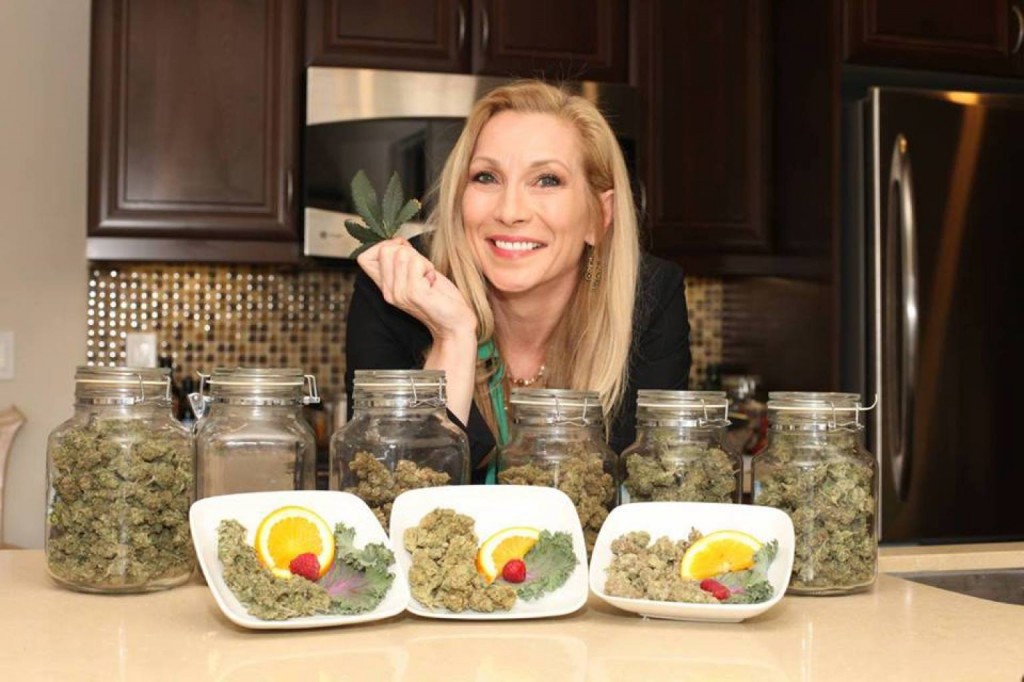 As an Activist with a physical disability who is also an herbalist named Jane Hash (my real name), I have learned to accept controversy as a part of life, to choose the causes I fight for wisely and laugh at people’s jokes even if they aren’t very funny.

You really don’t need to be an herbalist to deduce the fact that cannabis is an herb, not a drug.  Yet, I was always afraid to express my belief that cannabis should be legal for medicinal purposes.

That fear went right out the window the first time I watched a Cheryl Shuman video on YouTube, where she said she wanted to change the face of the modern cannabis consumer.  In addition to being a patient who uses Cannabis for medicinal purposes, she specializes in public relations, marketing and making connections in influential places.

After watching Shuman’s video, I shot out of the green closet like a cannon and landed on the frontlines with the Ohio Rights Group (ORG).  ORG is a non-profit organization, lead by John Pardee, that is currently gathering signatures to put the Ohio Cannabis Rights Amendment on the ballot in 2014.  OCRA will give Ohioans the right to use Cannabis for therapeutic purposes, as well as hemp for industrial purposes.

Recently, Shuman aka the ‘Martha Stewart of Marijuana’ who currently resides in Beverly Hills, joined forces with ORG and launched a ten-day media tour across Ohio.  I had the exciting opportunity to interview Shuman and Pardee at the last stop of their tour, which was in Cleveland at an event made possible by Cleveland NORML.

What was your perception of Cannabis before you started using it for medical purposes?

Shuman: I have to admit, back in the day I was a ‘Suzy Straight’‘Reefer Madness’ kind of a chick.  I’m an Ohio born and raised farm girl, and my family is kind of the June Cleaver type of family where we were taught, in true form to the reefer madness philosophy that people who use cannabis were outcasts and not productive members of society and by all stretch of the imagination you were to stay away from it.  It wasn’t until I started using medicinal cannabis myself and it started working for anxiety disorder, depression, chronic pain, cancer, that I realized 1) we’ve been lied to 2) Cannabis was legal on our pharmacy shelves until the 1930s as a medicine and that’s when I decided to come out of the closet, and tell the world. 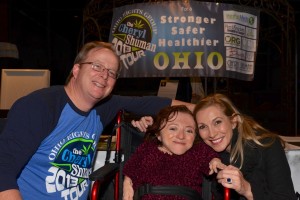 Once you became a Cannabis patient, how long did it take to see results?

Shuman: The results were instant.  The very first time I tried Cannabis was at the insistence of my medical doctor and my psychiatrist.  They were treating me for chronic pain, PTSD, a sleep disorder and anxiety.  The doctors at that point had me on 80 mg’s of Prozac, plus Vicodin, plus a mood stabilizer, plus a sleeping pill, plus an anti-anxiety pill.

My pain was somewhat under control but I couldn’t stop thinking about suicide and I just didn’t think that was healthy.  I was a single mom with two young girls.

My psychiatrist told me “Lady, you need to smoke a joint.”  I’ll never forget it.  I didn’t know what to think at first.  I thought it was a joke, like I was on an episode of Candid Camera.  I somewhat felt insulted because of my programming as a child.  Do I look like someone who would smoke pot?

He saw my reaction and said, “Look.  It’s 1996.  Prop 215 has just passed.  It’s legal for patients.  As a medical doctor, as your therapist, I’m telling you that cannabis will give you better results as a mood stabilizer than anything that I have tried.”  He admitted that he used it himself.  He had his own garden where he had grown his own.

I had never rolled a joint.  Never smoked a cigarette.  Didn’t know how but I was willing to try it because at that point my quality of life was poor and I was willing to try almost anything, especially since my doctor was the one insisting on it.  He rolled a joint for me.  The first puff I took, I coughed my lungs up because I didn’t know how to properly inhale.  The second puff I took, I felt better instantly, better than I had felt in years of pills and pharmaceuticals.

Within 30 days of using cannabis I was off of all pharmaceuticals.  My quality of life was superior and I used it for almost two years and had excellent results.

Then, fast forward to 2006 when I was diagnosed with cancer.  That’s when I learned about cancer and cannabis and how it is used to reduce tumors, to reduce seizures and to reduce chronic pain.  It’s also an aid for nausea when you’re going through radiation and chemotherapy.

I tried it and again and went from being on 27 pharmaceuticals, waiting for hospice care, on an intravenous morphine pump to, within 90 days being off the pharmaceuticals, being able to drive again, being able to go to the bathroom again – getting the catheter and colostomy out so I could go to the bathroom by myself.  At the end of that 90 day period, I was able to go back to work full-time and rebuild my life.  In my opinion – I used to think of it as a miracle but it’s not really a miracle per say.  There is scientific evidence and clinical trials that show it’s not just a miracle, it’s real life science.  This is a medicine.  It was life changing for me.

How would your life be different, if you had chosen not to use Cannabis?

Shuman: There is no doubt in my mind that if I hadn’t made that choice, I would be dead right now.  It’s as simple as that.

What is your relationship with the Ohio Rights Group and how did you become affiliated?

Ohio is my home state.  I was born and raised on a family farm in southern Ohio.  My family still lives here…my parents, my sister, and my nieces.  It really would be nice to visit my family and my home state without fear of prosecution or arrest.  Your home is your home.  I have such fond memories of Ohio.  I remember growing up with hayrides, wiener roasts, and ice-skating on the ponds.  I love Ohio.  But right now Ohio is an illegal state for patients like me.  I have so much fear of traveling with cannabis because I don’t want to get into any kind of trouble.

So, when John Pardee had seen me on The View and Katie Couric and a number of other talk shows, he reached out and called and said, “Hey.  I heard that you are an Ohio girl.  Would you be willing or able to do something or anything for us?”   I cried a little bit.  I felt like I was the girl winning the Miss America pageant or been asked to the Homecoming Dance or something.  Just tell me where to be and what you need me to do, I told him.

I don’t care how jaded you are or how much you feel cannabis is a gateway drug–or your politics.  Almost every single person across this country has been touched or moved or somehow has been involved with someone who has lost their life to cancer or is facing Alzheimer’s or dementia or epilepsy, or AIDS.  The bottom line is, this is a medicine that works to alleviate those symptoms.  I say, almost every single day, cannabis is a miraculous plant that can heal a multitude of illnesses but more importantly it can heal our economy.

Cannabis and hemp is estimated by economic experts and political experts, to be a 47 billion dollar industry by 2016.  And there’s that old saying ‘As goes Ohio, so goes the nation.’  I believe that we have the momentum in this country to put this legalization effort on the ballot for 2014 and I believe that by showing Ohio can lead this country, I believe that is a tidal wave that will have a ripple effect throughout the entire country.

Of all the states that currently have legal access to Cannabis for therapeutic purposes, they all seem to have encountered issues in implementing their programs.  Which of those states could Ohio learn the most from?

Shuman: Colorado has a great program in that the Department of Revenue monitors everything from seed to sale.  The important thing is, the government needs to get their percentage or their revenue from it in order for them to be happy.

Let’s talk about the scheduling problem.  Cannabis right now is a schedule one drug, in the same classification as heroin and a lot of other really nasty and dangerous drugs.  You and I both know though that cannabis is actually a very benign substance.  The problem with the scheduling issue is that you have people who can lose their houses, lose their jobs, etc just because of a scheduling problem.  As a schedule one, it says it has no medicinal value.

What I ideally would like to do is to see all the legal states come together, form a national coalition and a sounding board so that we can legalize this on a federal level across the board.

Shuman remains pharmaceutical-free, works full-time, and uses Cannabis from the moment she wakes up until she goes to bed at night.  She also claims that the highlight of her Ohio tour with ORG was meeting me because observing my activism motivates her to keep fighting as well. 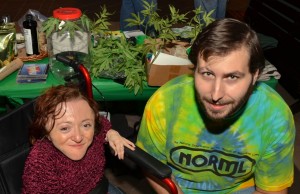 Explain the process that took place in creating the Ohio Cannabis Rights Amendment.

Pardee: The Ohio Cannabis Rights Amendment was derived out of a previous attempt in 2012 to put therapeutic cannabis on the ballot.  We were unsuccessful but we’ve regrouped, reorganized, tweaked the language, and we’ve added industrial hemp.  Then we went back and got our requisite 1,000 signatures to present it to the Attorney General’s office and the ballot board.  We got well over 2,000 signatures for that.  Now we have over 50 offices, sponsored by county captains and we have over 25,000 volunteers.

The Ohio Cannabis Rights Amendment includes the industrial use of Hemp.  How do think the passing of this amendment would affect the agricultural industry here in Ohio?

Pardee: In many great ways.  Number one, from a Farmer’s perspective, they have the opportunity to grow a cash crop that is not GMO; it’s not a patented process by agricultural giants.  Number two, the profit margin on hemp is vastly superior to corn, soybean, and other crops that are grown in Ohio.  It’s really something that can benefit the Ohio Farmers because they can make more money and not be under the thumb of big agribusiness.  It’s also great for the environment.  It’s a deep tap rooted plant that helps aerate the soil.  It doesn’t require much in the way of fertilizer or pesticides, unlike other crops.
Pardee’s passion for this legalization effort is fueled by his desire to have his son, who is a Cannabis patient in California, back home in Ohio.