6 Reasons Why I Never Considered Marrying Someone Disabled

As a pre-teen, I watched a deaf couple my parents knew end their marriage of 20-plus years. They had three children and it was devastating to see their family being ripped apart. I am sure there were many reasons why the marriage failed, but it became apparent that because of their disability they had in many ways isolated themselves from others. I couldn’t help but wonder if this was a major cause in their failed relationship and it became something I thought about when I imagined a future spouse. I know there are many happy couples out there where both spouses have disabilities, such as TLC’s The Little Couple, but there are some valid reasons why a relationship between two disabled people doesn’t always make sense.

Now before you feed me to the wolves, let me explain:

Growing up in Canada as a double-arm amputee I had many opportunities through The War Amputations of Canada to connect with other amputees. The friendships came easily because we had our disabilities in common. When I was a teenager, my parents became a little wary when I began regularly emailing another amputee. First, I was just a teenager and secondly they didn’t want me developing a narrow view of who I could be with.  During college, I become good friends with my neighbor, Jon Bateman, who has spina bifida and is a fellow blogger here on The Mobility Resource. Connecting with other physically disabled people usually isn’t a problem for me, but I began to realize that the connection was sometimes too close and isolating.

For example, Jon and I would privately spend hours talking about how people with disabilities are discriminated against. It was easy to do because we understood each other completely. The conversations were enlightening, but they also began to affect our interactions in a negative way. Neither of us wanted to get stuck in a place where we were always complaining about people’s bad behavior and only seeing the perspective of a disabled person. There is a whole world out there full of different people and ideas, which we both wanted to be a part of.

2) You need more in common.

I am not against people with disabilities being in a relationship with someone who is also disabled, but you need to have more in common than that. Common beliefs, personality, mutual attraction and hobbies all support a healthy relationship. People used to question why Jon and I weren’t a couple, and although they tried never to say it, they thought we were a good match because of our physical disabilities. We both knew that was not reason enough to be together. The truth was we would have driven each other crazy!

3) You may become more disabled.

Those in a relationship should balance each others’ strengths and weaknesses. If Jon and I had ever entertained being together, we would have both placed ourselves in more disabling situations and would have caused a huge strain on our relationship. I don’t have any arms and Jon has limited use use of his legs. Separately we are very independent, but together who would have carried the groceries, for example?  I wanted to have a family and in order to do so I needed to be with someone that could do some of the physical tasks I couldn’t, like carrying a car seat or collapsing a stroller. I didn’t marry Gareth so he could do things for me, but where I fall short he is there and vice versa. I like this security. Our relationship is certainly not one-sided – we both put a lot into it, but it has required some modifications to make it work.

4) You may have a limited social circle.

If I had chosen to be with another physically disabled person, the other friendships we sought may have only been with others in a similar circumstance. I would have deprived myself of potentially rich and meaningful friendships. Instead, I have a variety of friends; few which are physically disabled, but we have other things in common. I admit being around other people with disabilities boosts my morale when I am feeling weighed down by my physical obstacles, but being constantly immersed in those relationships limits your social circle. When I was growing up and my parents noticed when I got a little down; they were thankful for the opportunities I had to interact with other amputees at national conferences. At the same time they encouraged me to adapt to the world instead of expecting it to adapt to me.  All the amputees in Canada weren’t going to move to one city so we could all be one big, happy family! 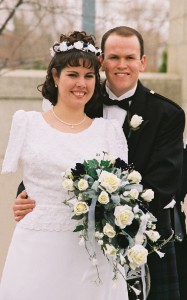 5) You may lose perspective.

Having a husband that doesn’t have a physical disability has helped me maintain my perspective of what is important to me. Instead of focusing on my disability, he motivates me to be as independent as possible. Being with him has helped me realize that everyone has challenges and although they may not be physical challenges, they are challenges nonetheless.

6) You don’t get the best of both worlds.

I love feeling like I belong to a community. When I meet up with amputee friends, it doesn’t matter that we haven’t seen each other in a year – we have an instant bond and connection. That said, I am glad that is not the only community I belong to. I get to be a part of a disabled community, a family, a church community, a neighborhood and a school community. I benefit not only from close relationships with people with disabilities, but from friendships with others. If I had married a person also with a disability, I may not have gotten the best of both worlds and when it comes to raising my children that is what I want for them.

Although I don’t feel marrying another person with a disability would have worked for me, I also believe it can work; it just may require more effort. We don’t choose who we fall in love with. Love happens when it happens. Just like any other couple out there; hard work, patience, perseverance and forgiveness are keys to a successful relationship. 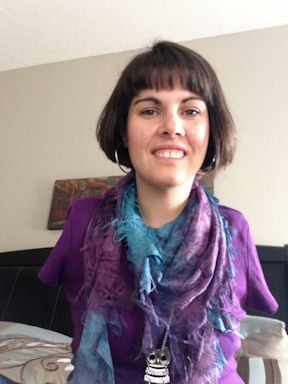