Have you ever had one of those days that you’re just trying to slug through and end up making all the wrong choices?  Follow me on my most recent journey of my not so perfect day.

I guess I should start by saying that I have Tuesdays off.  I have kept Tuesday as my day off because my daughter doesn’t have preschool on Tuesdays and, if we don’t have appointments to go to, it’s our day to hang out and do girl stuff.  However, lately it seems like we almost always have appointments and are running around the entire day. 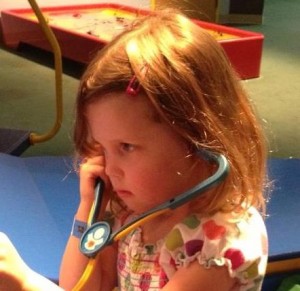 Today we had a 9:00am and 9:30am clinic appointment at the hemophilia center for both kids yearly check ups.  We were running late after a typical chaotic morning of kids fighting and lost shoes, and then we hit traffic so we arrived 10 minutes late.  I let the kids eat Rice Krispie treats for breakfast with a side of éclairs.  I had them in a box leftover from church, instant breakfast for the hectic Mom!  We were at the Hemophilia Center from 9:10 until 12:10, while we were in the clinic room, my son’s video game battery died almost immediately because he played it all morning instead of getting ready.  Then he harassed me for my phone to play on, and I gave in eventually so I could have 10 minutes of peace to talk with the nurse about my daughter.

As we waited, the kids built a fort under a chair with pillows and other junk.  They both “fell” between the bed and wall multiple times.  My daughter asked at least 10 times if she would need a needle.  She also went to the bathroom 3 times and freaked out about having her temperature checked which kind of looked like a needle!  My son had to have blood work and an infusion so both kids watched a Sponge Bob YouTube video on my phone while the IV was started.  I realized shortly after we got to the appointment that my son hadn’t taken his medication that morning so I was stressed about getting him home to take it before it was too late.

After the appointment, we hit a drive through for lunch (yes, this is turning into a very healthy day, I promise, we don’t always eat like this).  When we got home, I ran in, changed my clothes which of course my drive through chicken sandwich had leaked on, and grabbed pills for my son.  I got my son to school around 1:15.  Then I hustled my daughter to our next appointment, the dermatologist to look at her 2 warts.

I would happily treat the warts at home but the last time we tried, she screamed for 2 hours, so we figured we’d let the dermatologist zap them off and be done with it.  “Zap” apparently was the wrong term to use as my 5 year old daughter has been telling everyone she knows that she’s having laser surgery! We got to the appointment right on time for once!  By the time we met the doctor, my daughter had asked 3 people if she was having laser surgery, they all said “NO”!

The doctor suggested we freeze the warts, which seemed sensible and way less stressful than applying the goop to a screaming 5 year old every night for a month.  However, once they froze one of them, Miss Cooperative was not about to let them do the second one and flailed so much that the doctor gave up.  Regardless, I learned that even if they “zap” them off, we still have to do the home treatment afterwards so back to the drawing board on that one! We stopped to grab the wart stuff we were recommended to try and hustled home, pulling in right behind my son’s bus!

Then the homework battles began and lasted from 3:30 until 5:15, while my daughter took a bath (unbeknownst to her, so that I could start the soaking process for those darn warts!).  Dinner was my daughter’s favorite, mac and cheese, no veggies again!

Then we rushed to get ready for my son’s concert.  He performs in two special music groups at his school and of course, tonight is one of his concerts.  My daughter had to have a complete new outfit due to ketchup and mac and cheese goop landing on all of her clothes.  With some prodding to put away the video games and get moving, my son got dressed in his black pants and red shirt.  I helped him get his black dress shoes and socks on. I had special ordered a black belt with a magnetic clasp for his concern outfit, I hoped it wouldn’t be too hard for my son to manage given the limited use of his right hand.  However, I would be left wondering about that, because the belt had vanished so he had to go without. 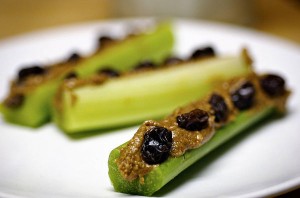 We hustled to the concert in order to get tickets which were distributed on a first come, first serve basis.  We got pretty good seats on the right side of the auditorium and I sent my son to meet up with his choir.  When his school came out to perform, they were on the far left of the stage, it would have been hard to be any further away from where we were sitting.  Still, I know he saw me when he flashed me a big cheesy grin.  The performance was really great, all the kids were fantastic! My five year old daughter even behaved fairly well.

When we got home, the kids couldn’t go to bed since they were, of course, starving! I redeemed myself a little bit by serving mango and ants on a log (celery with peanut butter and raisins) for a before bed snack.  Then we found a piece of homework that we had missed earlier, and finished that up.  I gave meds and sent kids to bed, by now it was nearly 10:00 pm!  I spent a few minutes tucking in kids and then studied quickly with my son, while we snuggled in his bed, for the states and capital test the next day. By the time he was asleep, it was well after 10:00.

Days like these aren’t really out of the ordinary, but they still wipe me out.  Nevertheless, watching my son sing with that big proud smile on his face makes it all worth it!  I’m guessing this is a pretty typical day in the life of a family raising kids with complex health concerns and disabilities. Many moments were not my proudest mothering moments, right down to leaving the dishes in the sink so that I could get to bed before midnight! I’m not perfect, I’m just a Mom trying to get through the day.  Some days we get through it better than others.  I choose to focus on the big things, especially after days like this, my kids are safe and they know I love them, that’s enough for me.

While I don’t have any profound advice on managing these days, I would like to share one thought.  We are all doing the best we can with challenging circumstances, don’t beat yourself up, just hold your head high and know that tomorrow is a new day!