Arguments Over the “High” of Cannabis are Half-Baked 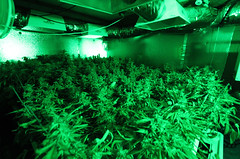 Over half of the US population has some type of documented disability.  This umbrella term describes unapparent conditions like Dyslexia, as well as more obvious diagnosis’ including Dwarfism.  Many who fall under the classification of “disabled” are unable to work because of their disability and the extra health issues that come with the territory.  Luckily, the pharmaceutical industry is prepared with an arsenal of medications, approved by the FDA, to help manage these issues.

Many of these approved medications have proven to cause further disabling conditions though, including death.  For example, those who have paralysis or muscular dystrophy are prone to muscle spasms, which can cause physical discomfort and disrupt basic daily living activities.  A group of drugs known as muscle relaxers are generally prescribed for this.  Some of the side effects of these drugs include rashes, vomiting and heartburn.  So, quadriplegics get to trade in their muscle spasms for a rash and a few vomiting spells?  Doesn’t this seem a bit counterproductive?

Wouldn’t it be amazing if there were one medication that would relieve symptoms of multiple disabilities including, depression, cerebral palsy, lupus, HIV and even cancer?  What if the potential side effects of such a medication was, increased appetite, restful sleep and elevated mood?  If this medicine existed, imagine the positive transformation that would take place in the lives of people who not only have to deal with their disability but also suffer the consequences of their prescribed treatments.

This medicine does exist. It’s called cannabis.  The medicinal and nutritional use of cannabis can be traced back to 6000 BC.  It was first listed in the US Pharmacopeia in 1851, as a safe and effective remedy for a wide variety of health problems including morning sickness.  In 1937 however, The Marihuana Tax Act was set in motion.  This tax posed an extreme financial hardship on doctors, which made it nearly impossible for them to continue to provide cannabis to their patients.  Then the Controlled Substances Act of 1970, which classified cannabis as “having high potential for abuse, no medical use and not safe to use without medical supervision” was passed.  Even if a doctor could afford to prescribe cannabis, it was now illegal to do so.

Coincidentally, during this very same era, new pharmaceutical drugs like antibiotics became available to patients across the US.  While a popular antibiotic known as “Penicillin” has proven useful in combating diseases such as syphilis, it comes with a long list of frightening possible side effects and it is no match for the ‘super bugs’ of today like MRSA.   Giovanni Appendino of the Piemonte Orientale University, in Italy, and Simon Gibbons of the School of Pharmacy at the University of London, U.K., have been studying the antibacterial properties of Cannabis.  Gibbons claims, “The cannabinoids (chemical compounds found in Cannabis) even showed exceptional activity against the MRSA strain that makes extra amounts of proteins that give the bugs resistance against many antibiotics.”

The cannabinoids which proved the most effective in combating this resistant bacteria are the ones which do not contain psychoactive properties, so using Cannabis in this medicinal fashion will not get a patient ‘high.’  “What this means is, we could use fiber hemp plants that have no use as recreational drugs to cheaply and easily produce potent antibiotics,” Appendino reports.

Dr. William Courtney, M.D., and his patient and fellow researcher Kristen Peskuski claim there are other ways of using cannabis for medical purposes without getting ‘high.’  In their documentary, “Leaf” they illustrate how Peskuski attempted to manage her lupus, rheumatoid arthritis and other disabling conditions with a cocktail of over 40 prescribed medications.  The side effects of these medications overcame her.  By the age of 16, Peskuski could no longer get out of bed and her mother feared she would die.  After spending several years in this condition, a friend introduced her to Dr. Courtney who educated her on the benefits of juicing fresh, raw Cannabis.  Within four weeks of juicing Cannabis, she was pain-free and was able to start enjoying life again.

Opponents of the legalization of cannabis argue that ‘getting high’ is dangerous.  Statistics show in 2010, 100,000 American’s died from prescription drugs, yet there are zero recorded fatalities attributed to the medical or recreational use of Cannabis–ever.  Another weak argument against the legalization of Cannabis is, its supposedly addictive.

According to the CDC though, over 40 million Americans are currently addicted to cigarettes.  It is a well-known fact that cigarette smoking and second-hand cigarette smoke causes a list of fatal conditions.

Health oriented organizations which endorse the legalization of medical cannabis include the AIDS Action Counsil, Lymphoma Foundation of America, Multiple Sclerosis Society (UK) and many others.  Approximately 19 US states have some type of Compassionate Care Initiative, which give patients limited access to Cannabis and six other states are working toward establishing similar initiatives. Are we to conclude that the FDA and other legislative branches of the US government only approve of drugs and addictions that will keep us sick to support the growing pharmaceutical industry?