Accessible Taxis: A Civil Right or a Nice Perk? - The Mobility Resource

Accessible Taxis: A Civil Right or a Nice Perk? 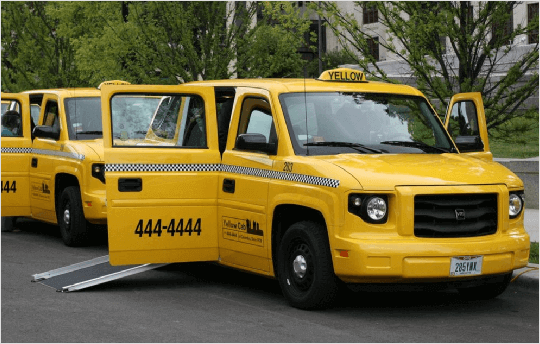 The Americans with Disabilities Act was passed over 20 years ago, and it made sweeping changes across the country. Accessibility and equality was suddenly everywhere. Entrances to public facilities, bathrooms, schools, how we are treated in the workplace, so many things changed, but taxis and how many should be made accessible in a city remains murky.

The ADA didn’t ignore accessible transportation. It required all public transportation – city buses, subways, light rail stations, as well as public school buses – to be accessible. Even cab companies were included, but only to a certain degree. If a private entity provides mass transportation on a large scale, it must also provide a wheelchair accessible option.

People with disabilities are like anyone else and love the idea of just hailing a cab from the curb, but it’s rare we get that chance in the U.S. Very rarely are there enough cabs randomly about to provide this experience. Interestingly, over in London, a city with very old architecture and lots of inaccessibility, they’ve at least made every cab wheelchair accessible. That’s right, every single one.

Sadly, London remains the sole city in the world to be so far ahead in the realm of providing accessible cabs. Here in the United States despite our famous ADA law, we are severely behind in the accessible taxi department. Getting cab companies to see the benefit of having accessible cabs has been impossible; all they see is a cash cow business venture that won’t make them a profit despite government grants, medallions and other perks being offered.

In our nation’s biggest city for example, New York City, a city with 13,000 cabs, only 200+ were accessible. That’s an abysmal 13 percent, but it’s about to go up. It took a very messy lawsuit by disability advocates from Taxis for All in New York City in 2011 that finally concluded last year, that says NYC must increase the number of accessible cabs offered by up to 50 percent of the cab fleet in the entire city by 2020. Who will pay for these vehicles to be adapted  remains unseen, however a .50 cent cab fare surcharge has been proposed.

It’s also just as bad in other large cities like Boston, Philadelphia and Chicago, where among the 1,000 or so cabs available in the city overall, only a dozen or less are accessible. And in several other metro areas like Minneapolis, you won’t even find one accessible cab to hail for around-town use (airport cabs being the exception). That’s how bad it can be in certain cities, and sadly our only option to change this state of affairs is via a lawsuit. It’s just a national embarrassment our country doesn’t work harder to enforce these laws.

Yet the larger question remains – is it legal to use the ADA as the backbone of a lawsuit demanding more accessible cabs? Depends on who you ask. Several people believe there are certain areas of this law where this could be covered, but it’s a stretch, and disability advocates across the country aren’t happy about being the bad guy.

We do have some wonderful cities that bust this rule though, such as Seattle, Los Angeles, Las Vegas, Tampa. These cities have accessible cabs that roam the streets daily in high numbers. They may not be the 100 percent accessibility rate that London has, but the cabs are out there; something many U.S. cities can’t say.

The ADA may be indeed hard to interpret in some areas, but rest assured accessible cabs are out there; it’s just too bad the ADA wasn’t more clear. It’s a travesty the accessible cabs are so darned spendy, costing $13,000/each. If accessible taxis were cheaper, you can bet they’d become a lot more available overnight.

Which US cities have you visited impressed you with their number of accessible cabs?