A Call To Action For All: Shovel The Snow And Save A Life - The Mobility Resource

A Call To Action For All: Shovel The Snow And Save A Life 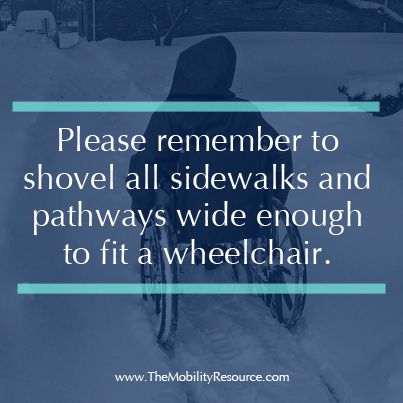 As many parts of the country are being blanketed with snow, the importance of keeping sidewalks and curb cuts clear becomes paramount.

For many, trudging through snow on uncleared sidewalks is merely an inconvenience worthy only of muttering some invective against the city, a business owner or landlord for their laziness.

For those of us who use wheelchairs and other devices, have mobility impairments or are seniors, unplowed sidewalks, streets and walkways are a major accessibility issue. At best, we are trapped indoors unable to leave home to go to work, school, appointments or wherever we were planning to go.At worst, we are forced to put our lives at risk when we have no choice but to wheel in the street to avoid impassable sidewalks. Often, folks who use wheelchairs get stuck in the snow and must depend on the kindness of strangers to rescue them. This has happened to me and many of my friends countless times.

People sometimes make glib comments – “stay at home,” “get a power chair,” “use para-transit.” Staying at home isn’t a good idea when you work and bills must be paid. Even the most empathetic boss is going to eventually get tired of the “snow excuse” and you’ll find yourself disciplined or terminated. Contrary to popular belief, a power wheelchair won’t get through six inches of snow, ice or slush – the wheels will simply spin uselessly. Those people who advise us to use para-transit obviously don’t understand how it works. Para-transit is for people whose disabilities prevent them from using fixed-route buses or trains. One has to apply for the service and have a doctor’s statement to that effect. Those of us who are fully capable of using the regular buses often don’t qualify.

Folks — whether you are private citizens or business owners, clear the snow from the sidewalks in front of your property. If your property is on the corner, this also includes the curb cuts; they are the ramps located at the end of each block, and at traffic intersections that allow a wheelchair user to safely leave the sidewalk and cross the street. If you aren’t able to clear the snow from the sidewalk in front of your property yourself due to age, disability or health issues, have someone do it for you. Don’t hesitate to ask a friend or your neighbors. Most, especially kids and teenagers, are willing to do it for free or for a few dollars. Barring that, almost all cities have programs that helps seniors and people with disabilities to find someone to clear the snow around their houses. Call your city office hotline to get more information.

Apartment managers and landlords, this applies to you as well. Nothing is more infuriating than being stuck at home because you as the property owner or manager are too lazy or thoughtless to make sure that the snow is shoveled at your complex. Under most city, county or state statutes, it is your responsibility as the landlord to keep the common areas of your property cleared of snow.

Most cities have specific rules and regulations regarding snow removal, including in some places, hefty fines for noncompliance. Unfortunately, the ordinances are rarely enforced. Why? Because most jurisdictions, themselves, don’t follow their own rules when it comes to snow removal. Almost every city and town that I’ve lived in has vacant properties that it owns where the snow is never cleared. In some cities, the streets and sidewalks are actually state or federal highways, so the city won’t clear them because its the state’s or the government’s property. This is also the case for places that people go to receive benefits or services such as food stamps, social security, drivers licenses or vocational rehabilitation services. While these buildings may be in your city, they are often operated by the county, state, or federal government. As they bicker with the city over whose jurisdiction covers snow removal, the sidewalks aren’t cleared and people are inconvenienced or sometimes, injured.

The same thing happens with transportation companies and districts. There is a fight with the city over who clears the snow at bus stops. It is common in many cities for bus stops and shelters to have mounds of snow in front of them, as well as the sidewalk and corner that they encompass. While the average person shrugs it off and wades through the snow to get on the bus, that is impossible for someone using a wheelchair. I know from personal experience that wheelchair lifts on buses do not operate properly in the snow and cold. They are unable to be deployed when the snow is more than a couple of inches deep because they cannot rest on the flat ground where the passenger can board.

At times, snow is piled so high at the bus stop that folks in chairs must wait in the street for the bus because the wheelchair lift won’t operate properly in deep snow. In my case, this usually results in the police being called, and me having to educate officers about the realities of getting about in a wheelchair during winter. Thankfully, they always understand my plight. In fact, the police don’t even bother me when they see me in the street during the winter. They know that I have no choice but to be there because the sidewalks aren’t clear.

Over the years, I have worked with city official in several cities about how not shoveling snow can and does sometimes lead to tragedy for folks in wheelchairs and some seniors. Though there has been limited success, overall, the shoveling just isn’t getting done. Also, cities insist on having snow plows leave the snow piled up at the curb cuts preventing people using wheelchairs from crossing  or getting out of the street. Apparently, it’s much too difficult and expensive to have someone clear the curb cuts while the streets and sidewalks are being shoveled.

While doing “snow advocacy” over the years, I have sometimes had my name and face splashed across the television screen or in the newspaper. I have also been able to read the responses from people once the story goes online. It is mind-boggling to see the depths of the ignorance and apathy that people exhibit. Lack of snow removal is a potential safety concern for everyone. Surely, if it were your child, parent, friend or loved one who got injured or died because some homeowner, landlord, company or agency refused to clear the sidewalk and curb cuts, you wouldn’t be saying some of the nasty things that I’ve heard and read.

Keeping sidewalks, walkways and curb cuts clear of snow and ice is a good, neighborly, safety-conscious thing to do. In many places, it’s the law. Don’t let laziness, indifference or the lack of enforcement of local ordinances keep you from doing it. At the least, you’re keeping others from being inconvenienced. At the most, you’re possibly saving a life.