Parental rights advocates are trying to stop the U.S. Senate Foreign Relations Committee from considering the ratification of a United Nations-sponsored treaty designed to preserve the rights of persons with disabilities.

Citing the superiority of American laws to protect those rights, ParentalRights.org recently asked those on its e-mail list to contact their senators and urge them to not hold hearings on the United Nations Convention on the Rights of Persons with Disabilities (CRPD). 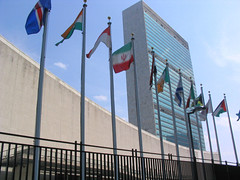 “We are hearing from multiple sources that the U.S. Senate’s Foreign Relations Committee is gearing up to hold hearings on the UN Convention on the Rights of Persons with Disabilities. The plan is to hold hearings sometime next month,” the advocates wrote.

“The United States Senate must not surrender our domestic sovereignty and the care of children with disabilities to unelected, unaccountable UN bureaucrats,” they added.

According to the text of the CRPD, it is intended to promote “the importance of international cooperation for improving the living conditions of persons with disabilities in every country, especially in developing countries.”

ParentalRights.org noted that this treaty has already been defeated once last year. The group touted U.S. law as more than sufficient to protect the rights of the disabled.

“Parents know best how to care for their children with disabilities. U.S. law is the gold standard for ensuring that people with disabilities are protected and able to participate in all areas of U.S. society,” ParentalRights.org. wrote.

The group urged its members to call their senators, attend local meetings and pass the word along to friends.

In the Senate vote last year, the treaty was ratified by 61 of the 100 Senators but fell short of the 66-vote super-majority it needed to pass.

The text of the UN Treaty expresses a desire to “recognize the inherent dignity and worth and the equal and unalienable rights of all members of the human family.”

One proponent of the treaty called it “an important roadmap for change, which can be used to shift current mental-health discourse from a discussion emphasizing the protection of negative rights, such as from involuntary detention or coerced treatment, to one emphasizing social rights and civic participation.”

The treaty also includes articles promoting the protection of women and children with disabilities. However, the parents object to some of the treaty’s other wording.

“By introducing the ‘best interest of the child’ principle as a government obligation,’ the CRPD places bureaucrats in the position to make the ultimate decisions regarding each child,” they wrote.