We Don’t Want A Stinking Cure – We Want Equality 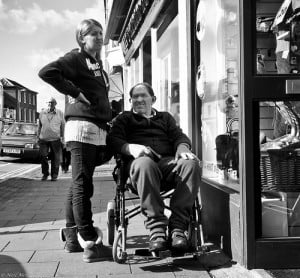 I see a lot of people wearing cool swag calling for a cure for various conditions, diseases and disabilities. While I’m not slamming people who do this, I have my own opinion on the matter.

I’ve never been one for fighting for a cure of diseases, conditions or disabilities. While you’re wearing your t-shirts, bracelets, pins and ribbons, I’ll be marching and going to jail fighting for the civil rights of people with the conditions your gear is showcasing.

My fellow activists from ADAPT and I will go to jail while fighting for people with disabilities to have the right to live in their communities–not locked away in some nursing home or institution against their will. I’ll be chaining myself to the White House gate fighting for your right to long term care. ADAPT and I will be putting it on the line, occupying streets and offices fighting for the right to accessible, affordable, integrated housing for people with disabilities because right now, it practically doesn’t exist.

I’ll be singing freedom songs with other ADAPT warriors as I’m being dragged off to jail fighting for the right to accessible public transit because I want to ride the regular bus with you, not the short bus! I’m gonna be standing toe to toe with politicians who, fueled by hate and misconceptions, glibly write and pass legislation or policies that try to scale back the rights and freedoms that ADAPT and I put our lives on the line to get. I’ll be chanting, “Business as usual, it ain’t gonna happen” as my friends and I with disabilities shut down your place of business because you refuse to make it accessible to everyone.

I’m going to be out there on the sidewalk day and night with my ADAPT peeps until the state budget people rescind the cuts in home care services that will send thousands of us back into institutions. I’m going to be pestering the media, getting them to join us in asking why cities don’t follow their own ordinances about snow removal on sidewalks and curb cuts, creating a dangerous situation for people using wheelchairs, who must wheel in the street because of this. I’ll bug every media outlet until they highlight the fact that people with disabilities are almost always left out of their jurisdiction’s disaster and emergency preparedness plans.

We’re not gonna let anybody turn us around as we march, hobble and roll on to freedom land.

ADAPT is a national, grassroots, nonviolent disability rights organization and movement that was founded in 1983. I have been involved with ADAPT for 27 years. We are activists who are proud of our disabilities. We don’t want a “cure”; we want equal rights and justice! That’s what we’re working for while you’re rocking your gear and dreaming of a cure.