It’s not every day you see someone with a disability in the center of an ad campaign. bBut every once in awhile, a great commercial featuring a person with a disability comes along, and the good news is that there are several impressive examples.

A few may have slipped by you, however. Some ads are only aired in other countries or maybe you weren’t born yet.

Ready to get inspired? Read on for 10 of the best examples of big brands practicing inclusion through advertising.

For Tanja Kiewitz, a handless models who hails from Belgium, she got the break of a lifetime when in 2010 she was asked to pose for an advertising campaign for CAP48, a non-profit that highlights disabilities in France and Belgium.  She was asked to replicate the same black and white photo ad made famous by Eva Herzigova in the original ad made famous ad from Wonderbra. 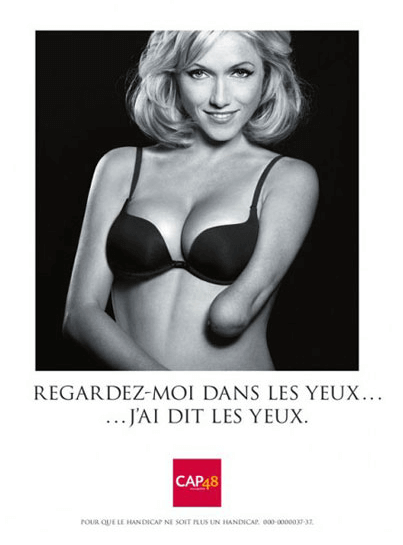 If you’re a fan of Guinness, you’ll definitely love the commercial they aired this fall featuring wheelchair basketball. The ad has a very poignant element – it shows men playing in wheelchairs, but at the end of the commercial it is revealed that only one needs to use a wheelchair, and the rest are his friends who want to be able to play at his level. Awesome.

Nike has long been known for featuring athletes in their commercials and Matt Scott, a UW-Whitewater Wheelchair basketball player, got the Nike treatment in 2007.  Known as “Warhawk,” Matt’s commercial “No Excuses,” definitely shows off his moniker.  The commercial doesn’t reveal he’s disabled until the very end, instead showing him practicing intensely in the gym.

During the presidential campaign in 2008, Liberty Mutual insurance made a  commercial urging everyone to vote – no excuses – and they drove their point home by featuring Teal Sherer, a well-known actress with a spinal cord injury, in their commercial. Titled “Election,” it shows Teal still going out to vote despite bad weather, car problems and an inaccessible polling place.

If you’re familiar with UK brands, then you’re surely heard of Debenham’s, one of the biggest department stores in the country. In 2010, their ads featuring Shannon Murray, a paraplegic model, was all the rage. They had her line up with all the other models in the photos for the campaign and her appearance in these ads also made her first model with a disability to appear on High Street. 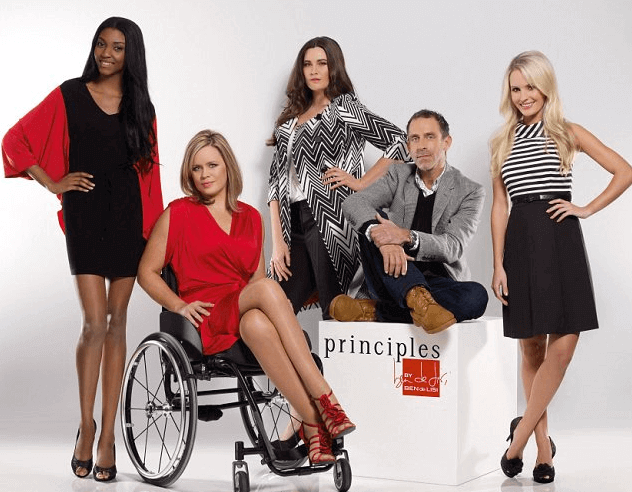 Angela Rockwood, a quadriplegic and one of the women in the Sundance Channel’s “Push Girls,” is also known for being a model. Back in 1997, she got her first break as a disabled model for Nordstrom, appearing in print ads in their catalog. Angela is also scheduled to appear in another advertising campaign for Nordstrom’s next year. Oh she looks so pretty. 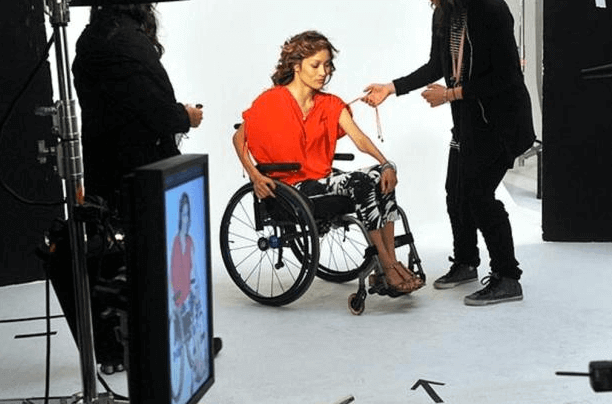 7) Adidas’ “Impossible Is Nothing” commercial

In Adidas’ “Impossible is Nothing” ad campaign, the theme featured a skateboarding wheelchair-user about to go down a wheelchair ramp. It’s in Japanese, but the point comes across beautifully.

From the Czechoslovakian organization Konto Bariery 77, they’ve created one of the best disability commercials ever made promoting workplace integration. It shows a bunch of young 20 and 30 something’s working together in an office, rolling around on their swivel chairs as they work and at the end of the commercial it’s revealed that one of them actually uses a wheelchair.

In honor of London hosting the 2012 Olympics, Channel 4, one of the biggest networks in the UK, created one of the coolest Paralympic commercials. It features their rugby team looking incredibly bad ass, with slow-mos and soundbites of the injuries they’ve sustained while playing.

Throwback time. In the 80s, McDonald’s made an incredibly endearing commercial called “My Best Friend,” and it followed two young girls, one who was paralyzed and one who wasn’t, as they hung out and did a bunch of “girlfriend” activities together like riding bikes/wheelchairs, flirting with boys and going to McDonald’s of course. Why don’t they make commercials like these anymore?  So cute.

So there you have it, 10 of the best examples of big brands including disability in their advertising and all are awesome in their own right. And while many of us thought we’d see a lot more disabilities in commercials by 2013, hopefully the Guinness ad that’s gotten a ton of buzz, will spur more disability-influenced commercials.

Have we missed any? What are your favorite examples of disability in the media?