Beating the Odds: How One Man Cheated Death Eight Times - The Mobility Resource 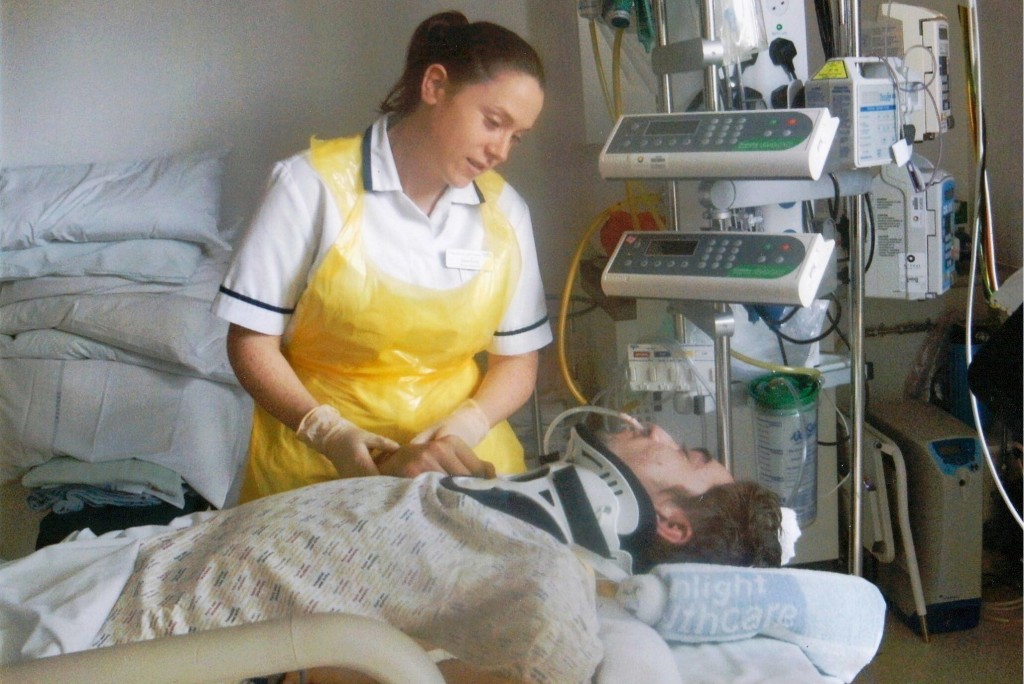 Matthew Hawksley is often thought of as the man with nine lives. At only 25-years-old, he has managed to cheat death eight times in the past two years.

When his life nearly came to an end—for the first time—Hawksley had been thriving as a professional welder and became skilled in helping fabricate everything from trains to planes. Unfortunately, that all came to an end in June 2011 while in Ireland for a work event. Looking to unwind a bit during their visit, Hawksley and a coworker decided to dive off a pier into the water below. At the time, he thought it seemed “perfectly harmless.”

But, Hawksley didn’t realize the water below was too shallow for diving and he suffered a devastating C5 spinal cord injury. “I drowned and was (considered) dead for 15 minutes initially,” he said, adding that he then went into cardiac arrest a total of seven times due to the shock to his nervous system.

“My accident was a massive shock to handle,” he said, adding, “I do not recollect the actual incident. All I have [in my memory] is, one minute, I’m running around full of life and the next, I am waking up from a long series of dreams. Luckily, I’ve still got all my memories [from before the accident].”

After waking up from a five week coma, Hawksley was essentially blind and could only see in black and white. Also, “I was unable to speak and completely paralyzed,” he said.

As most people with spinal cord injuries will attest, the recovery process is daunting. But for Hawksley, it was just the tip of the iceberg as he soon found himself battling both pneumonia and MRSA, a bacterial infection that is difficult to treat.

On top of that, Hawksley was diagnosed with testicular cancer in April 2012. Due to his spinal cord injury, doctors decided that he should not undergo chemotherapy, but that he would need surgery. Surprisingly, he says, “The cancer side of things was relatively easy [to manage]. I was diagnosed early and, as far as I know, 100 percent of the affected area was removed.”

In spite of everything, Hawksley has maintained an upbeat attitude and a positive outlook on life. His ambition has also helped him on his road to recovery, and he is now able to walk unassisted—albeit a bit unsteady. “My recovery has been nothing short of miraculous and rapid,” he admits. “Two years from paralysis to walking freely speaks for itself. My recovery has surpassed every medical estimate.”

It also surpassed the expectations of his family and friends. One day, “a friend said he wouldn’t be surprised if I was doing a triathlon in five years, so I took that as a challenge,” Hawksley says.

For six months, Hawksley kept to a new workout routine in preparation for the competition, and he raised quite a bit of money for charities that benefit those who have cancer or spinal cord injuries in the process. He also recruited a friend to shadow him during the triathlon in case anything went wrong. 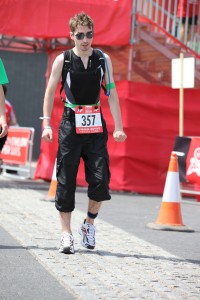 “Two years to the day I woke from a coma on July 27, 2013, I completed the Virgin Active Health Clubs London Triathlon,” he says. “It was a massive sense of achievement, and I’m very proud of myself as I took part in a triathlon the weekend of my accident. It all ties in very nicely.”

Having met the challenge put upon him, Hawksley’s only wish these days is to get back a sense of normalcy. “My ambitions, for the most part are, to get back to a normal life as such…and [I want to get] back to earning a living and back to forging a future from the shattered seabed where my last one lies,” he says. “However, it is a complete unknown as to how far my recovery will go or how long it will take.”

Fortunately, “my company kept me employed all this time,” he says, adding, “I hope to go back to work in the next few months, but a physical job is not in the cards.”

As an alternative to a welding career, Hawksley says he might pursue technical drawing. In the meantime, he has been volunteering his time with various charities—from Macmillan Cancer Support to The Back-Up Trust, an organization that provides information and support to those affected by spinal cord injury—and he has even been doing some public speaking.

“I am brand new to the speaker circuit and enjoy it immensely. Sharing my story and inspiring others is a joy to do. Showing it can be done as opposed to being told by a third party is what I’m all about.”

Ironically, Hawksley says he is now trying to deal with his biggest challenge yet. “Fast pace recovery for me was easy. Day by day, week by week in the safety net of the hospital, you’re in physio every possible moment, pushing hard every moment. When you get home and life gets in the way, it’s hard finding time to do everything. Time flies quick!”