Last month, Kevin Ogar of Englewod, Colo. was like any other serious CrossFit competitor — insanely strong, a huge fan of the CrossFit community and ready to win money at the CrossFit games.

But during a lift known as the “snatch” while at the OC Throwdown CrossFit competition in Costa Mesa, Calif. last month, Kevin dropped the 240-pound barbell after getting it up over his head.

The weight then did something crazy — it bounced off the floor behind him, hit a stack of nearby weights, which flew and hit his back, severing his spinal cord at the T11 level. Watch the video below). Kevin is currently undergoing rehab at Craig Hospital near his hometown.

CrossFit has long been known for its intense strength and conditioning, and lifts like the snatch are common. Participants do everything from heavy olympic lifting to conditioning moves like rope climbs, kettle-bell swings and pull-ups. It’s definitely not a program for the timid. Kevin just had bad luck.

Unfortunately, Kevin had no insurance at the time of his injury. He was a part-time CrossFit instructor in Denver, Colorado and a part-time cashier at Whole Foods. The CrossFit community however has lit up like wildfire after hearing Kevin’s story, which went viral and a monumental fundraising campaign began days after his injury.

With a hefty goal of $500,000, the CrossFit community has helped raise an unbelievable $354,029 since launching their fundraising effort after his January 11th injury. With the fundraising site aptly titled OGAR Strong, anyone interested in helping out can do so here. 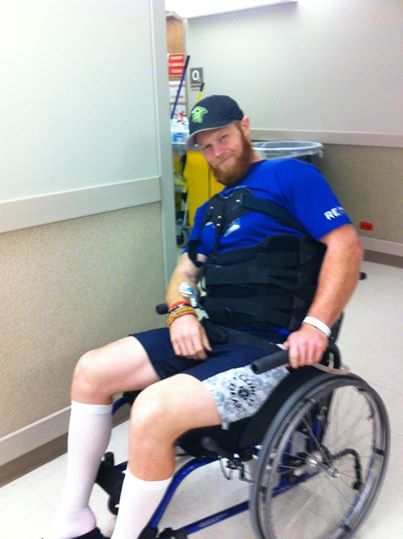 Hundreds of CrossFit gyms across the world are to thank for raising this money for Kevin’s hospital and post-injury expenses. Money that will be sorely needed for everything from bills to medical equipment, supplies, adapting his vehicle and home.

The amazing way the CrossFit community has come to Kevin’s aid makes sense to Toby Jurging,  CrossFit coach and owner of SPC Strength & Conditioning in Kent, Ohio. “The camaraderie of training with someone that is pushing just like you are builds a bond,” he says. “And that bond is universal.” “Hate to say it, but its like they have all spent time in the trenches together.”

It’s rare to see such an outcropping of support from any community as well, let alone one dedicated to working out. “When Kevin was injured,” explains Jurging, “the community could relate to the movement, the drive, the sacrifice.”

As for Kevin’s journey, it’s a tough road ahead. His spinal cord was torn at the T11 level with doctors grim about his recovery chances, but he will still have torso control and full upper body movement. If he doesn’t regain use of his legs, he’ll still be able to live independently.

Kevin might also want to get in touch with Chris Stoutenberg when he’s ready; one of the best wheelchair CrossFit athletes on the planet. Hailing from Ontario, Canada, Chris is one of the first people to compete as a wheelchair-user side-by-side with able-bodied athletes.

Donate to the fund for Kevin Ogar: OGAR Strong

Why do you love being a part of the CrossFit community?